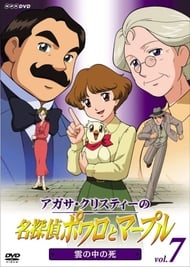 THE STAFF - Studio OLM has taken part in the creation of dozens of anime over the years yet it never managed to produce a single great show; this one being no exception. Most will probably only praise it for its work on the fabled Utawarerumono adaptation, although for me even that anime was nothing of interest. - The director of this show is Takahashi Naohito, whose roster also includes the aclaimed Berserk adaptation, as well as the rather interesting Figure 17. He is not a major one in the field and most of his career is wasted on subpar titles, but he has taken part in a few good projects. The current one by the way, is not one of them. PRODUCTION VALUES [Poirot, I choose you!] The general quality of animation and sound is pretty average. There are no spectacular graphics, no incredible songs and no amazing voice acting. They don’t suck either but the feeling of mediocrity is there and will probably tire or alienate most casual viewers. Heck, I’m a seasoned otaku and yet I didn’t like it at all. It reminded me of a slightly better Pokemon variant. Lots of still images and simple character figures, complete with cute mascot animals and obvious good guys and bad guys. Duh, it is kid’s stuff. Nothing eye catchy like half naked women or huge robots; just cute animals and cheery people. The series is not imposing neither for the teen audience (no emos or vivid action scenes) nor the younger one (no fairytale-like artwork), so it is a failure because of its mediocrity. SCRIPT [I think the butler did it.] I am very fond of perplex, multi-layered stories with an on-going plot. The series is practically stand-alone story arks consisting of various numbers of episodes. So, story wise we do not have a solid story. The individual arks are generally ok in terms of plot, although there are several silly events (irrational villain actions, predictable happy endings) that ruin all the seriousness. CAST [Aha! A stain on the suspect’s glove!] Because the story doesn’t have continuity, the characters do not really develop. They just solve mysteries in a light-hearted manner and that’s that. They are appealing if you don’t have high expectations from them but they will not be memorable at all, by the end of the series. They don’t look that great and their manierisms are very “frozen” because of the still frames and the lack of action in the series. At best, you will like the way they think and calculate but not the way they talk or act.LEGACY [- And the ghost is (pulls the mask) a lame Agatha Christie imitator. - Yes! And if it weren’t for you meddling kids, I would have gotten away with it.] No, no, no. This is all wrong. Detective stories are meant to be mysterious, thrilling, dark and full of violent events and people. What do we get here? Light-hearted adventures full of happy faces, cute mascots and off-screen violence. If you happen to have read any books or seen any movies of Agatha Christie, you will know that this is far from the real thing. It is for kids! Think of a more perplex Scooby Doo and you get the main picture. By the way, I hate Scooby Doo. And I am not fond of detective stories (even Film Noir is too sappy for my tastes); for me thinking and mixing clues in order to reveal villains is not as fun as space battles. What I mean is, not only the genre of this anime is not a mainstream one but also it is inferior to the established detective formula. SUGGESTION LIST Death Note Monster