After the Rain - Recommendations 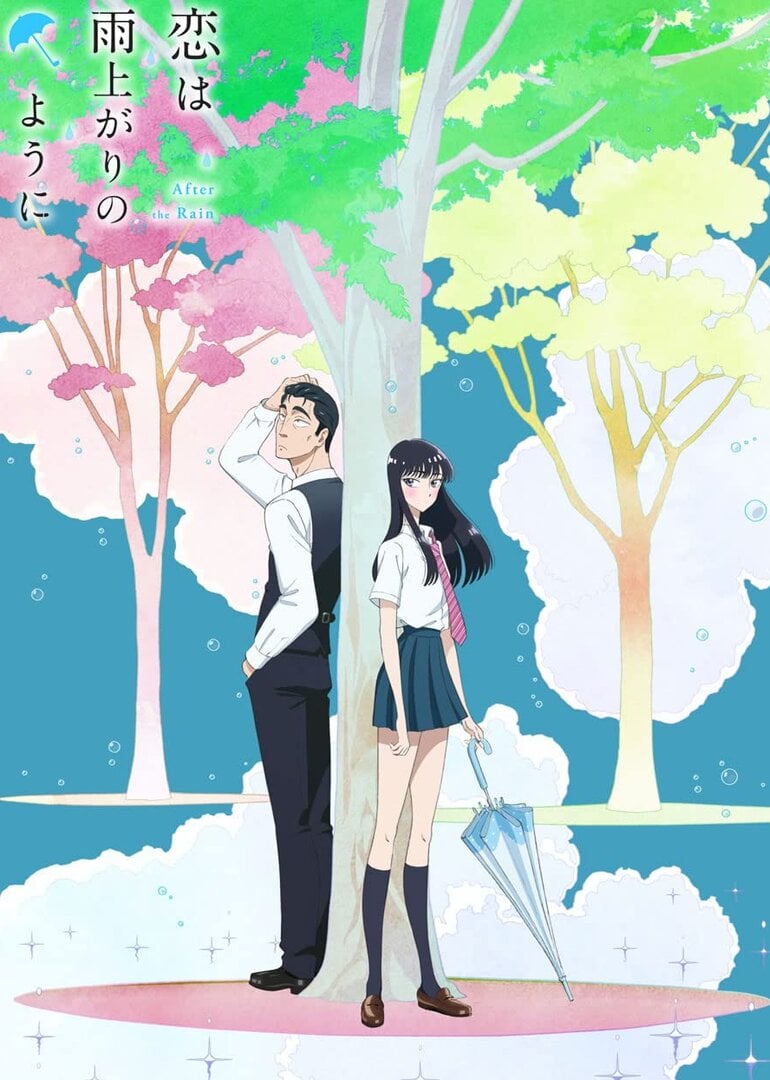 Yariba Eiji, a corporate slave whose only hobbies are video games and manga, gets through life by spending his time off relaxing at net cafes. One day, he happens upon Minamisato Karen a high school girl and ends up scolding her. This leads to her warming up to the 29 year old Eiji...! Not only that, Eiji's little sister, childhood friend, and his subordinate are also becoming interested in him. Love is coming at him from every direction! Juggling between his work and his newly developed ventures into romance, will Eiji's peaceful days ever return?

Yukimaru Hanako is leaving her family in Eniwa, Hokkaido, to go live in the big city of Sapporo and work with the HHTV news team. Hanako has bumbled her way goodnaturedly through the hiring process, which included a written test, an interview, and a presentation. One of the other new hires at HHTV, the stern, professional Yamane Hajime, has watched her in disbelief, infuriated that she seems to have so much success without taking anything seriously. After her first broadcast at HHTV, which could be seen as either very entertaining or a horrible disgrace, everyone's attention is focused on Hanako. Will she surprise everyone by succeeding in her new career or will she fail spectacularly?

Sae is a flight attendant working for ANL (AeroNippon Lines, a fictious airline). She wanted to work in this field thinking on the glamourous aspect of the job since her friends at the university were teasing her about her sex-appeal. She'll discover the truth about being a flight attendant while having to deal with the passengers!

A journalist is one who collects stories suitable for television and news, but the young journalist in Researcher must learn all the difficulties that come with the job including big wigs of the company who look down on her and the rival companies who threaten her business.

The romance story follows a young man who works at a restaurant and a career woman who works at a hotel. The man has taken an interest in the woman after always seeing on the same train together, and suddenly calls out to her.

Fuuko is a shy girl—so shy that she has trouble talking to strangers. Determined to change herself, she starts working as a waitress at Café Rhodos. The people she meets on and off the job will lead her through the often frightful world of adolescence, and beyond.

Labor Standard Inspectors. They are the men and women who work day and night to protect the rights of workers and employees from malicious employers who ignore the country's labor laws. Danda Rin just recently got transferred to the Geinan Labor Standards Inspection Office. She is extremely serious about her work, and will not stop for anything to bring down the hammer of the law on employers who treat their employees as if they are disposable.

Senior high schooler Hikaru Umino is desperately in love with his teacher, Kuniaki Shima. When he hears a rumor that Shima is engaged to be married, Hikaru does the unthinkable and forces himself on his teacher. Shima makes him atone for his sin by, unexpectedly, becoming “make-believe” lovers until Hikaru graduates high school. When the time limit expires, can Hikaru let go of his beloved teacher?