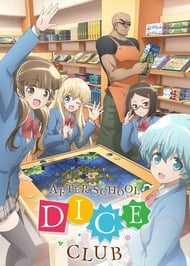 STORY: 4/10 This lighthearted story is about three unlikely friends, Midori (the determined one), Aya (the Eternal Optimist) and Miki (the Shy one), who form their bond of friendship through unlikely means…games! One day late after school, Aya and Miki somehow find their way into this little gaming shop owned by a large man named Takeru. Intimidating to the girls at first, things change when they find out that Midori works part-time at this particular establishment. Shortly thereafter, they realize that they are in a magical place of various board and card games. From here, the plot centers mainly on their friendship and the discovery of fun while playing these games, which, according to the anime, are not typical fanfare in Japan. I applaud LIDEN FILMS for taking a non-typical plot and making it into an anime. However, that’s all that After School Dice Club is really about; three friends playing a new type of game each episode. Arguably, it feels Episodic after the first few episodes with very slow pacing and undeveloped characters, albeit likeable ones. ANIMATION: 6/10 Artistic elements and designs are kept simple with no significant richness in color, but the characters and backgrounds are clean looking with enough definition to them add some charm and appeal. They fit the story perfectly. However, the animation is where it doesn’t do justice nor does it make up for the simplistic art style, whereas the anime, Hikaru no Go, does. What do I mean exactly? Simply put, for simple show such as this, there are too many times throughout where still scenes were being used with just some noise and music playing in the background. One potential way to make simple, slower paced anime more enjoyable is to animate the heck out of it! Disappointingly, LIDEN FILMS failed to that like Studio Pierrot did with Hikaru no Go. SOUND: 6/10 This is one section I do not have much to say, other than audio appeal is satisfactory, especially for this particular anime. It’s nothing exciting but nothing out of character either. Both the OP and ED are equally adequate, but unimpressive. CHARACTERS: 6/10 Excluding MINOR ones, nearly all of the MAIN and SECONDARY characters are underdeveloped. We learn little to no background to any of them. Where their backgrounds aren’t explored, their personalities make up for some of that lack of substance. Although not in the first few episodes, Emilia is a welcomed edition to the group of girls when she transfers from Germany and befriends Midori, Aya, and Miki. The four of them are a pleasant group of characters to watch and explore new, different games with. They are all charming in their own unique way, Most viewers will be hard pressed not to find them a likeable bunch. One MINOR character I believe is worth mentioning is Kyouko, Hana’s (Aya’s sister) best friend. She gets exposure in two episodes and it’s easy to see why she’s a strong, capable character, even with her limited screen time. OVERALL: 31/50 Interestingly enough, the anime’s title is somewhat misleading. After School Dice Club…there is no game in this anime that significantly involves dice. Plus, there is no “after school club” of any kind except in the sense of a group of close friends hanging out to play games all the time! There’s not even any consistency in the timeframe of when the girls play together, whether it’s after school, on the weekends, during the girls’ summer vacation, etc. With that being said, the title is a silly, insignificant squabble. Amid the obvious flaws of this anime, I found myself enjoying it, in smaller one or two episode doses; more than that might cause the viewer to succumb to the dream world due to the slow-pacing and rather Iyashekai story. Keep everything in this review in mind if you decide to give After School Dice Club a try. It’s a mistitled anime with a good amount of heart and simple fun to be enjoyed. ENTERTAINMENT: 7/10 ACHIEVEMENT SCORE: +2 to OVERALL My expectations were Moderate, and it delivered Slightly Above those expectations. 2️⃣Weighted Average System Score: (12 + 6 + 6 + 18 + 14 + 2 = 58/100 points) Additional Information: Video Format:  1080P HD Streaming Audio Format:  Japanese with English subtitles Publisher:  FUNimation Equipment Used:  Acer AN515-53-55G9 Nitro 5 Laptop

Houkago Saikoro Club (A.S. Dice Club) has a message that all the gamers inside us must hear ... and the warning which is only fair if taken seriously. And, it all centers on the theme which Linden-Funimation wants us to be better grounded and all the more wiser.  Board games.  Or, to some, bored games. These are most likely the video-game marvels of our age, smashing their way through level upon level with digital prestidigitation beyond my humble comprehension.  Hey, hero, look away from your device and see the throngs cheering you on.  Not there, are they? And the warning which is only fair if taken seriously. Example:  I passed my college years with a group of a dozen guys who were into the board game called Risk.  You know, battle the enemy armies and conquer the world.  Great times with great guys, but I never won once.  Came in second when I hunkered down in Argentina and waited out the smashing and bashing of the powers-that-be.  When the dust settled and my proposal for a power-sharing plan rejected, I went down with the fight which lasted a few dice rolls.  Fast forward a few deca ... a few years, and Hasbro has developed Risk for the computer.  Played often, won several times.  Sometimes the computer can be such a chump.  But, in computer play (v-game play as well), when you win, you win alone. Which is why Houkago Saikora Club is more about the comradery that is fostered around the board game.  Not the game itself.  Not so much the win, but the who you're with when you are just a little bit cagier, just a little more lucky.  And lose, and you have mates who will still console with the traditional 'good game!' The three girls are pivotal in the development of the plot.  Miki is painfully shy, to the point of being frightened of any human contact.  We meet her in her private world, shut off  by her headphones, into her music.  Alone.  We learn she has been bullied in her past, getting through elementary school with no friends.  Let that sink in ... no friends. Enter Aya, who literally runs across Miki avoiding hitting her with her out-of-control bike.  Miki and Aya's personalities are ... well, think of a lit match and a stick of dynamite.  Nothing wrong with a lit match.  Nothing wrong with a stick of dynamite.  Just leave these two apart.  Not so Aya, a carefree, adventuresome girl who first proposes to Miki that they wander around with the chance of getting lost.  Getting lost freaks Miki out, but, by making the effort to find oneself without setting out a destination, Miki discovers a beautiful world.  They stumble across their classmate Midori. Midori is a headstrong, no nonsense class representative type who goes by the rules.  But she is out in a section of Kyoto girls from their school are not allowed on school nights.  Miki and Aya follow Midori to her job, working in a shop that features board games and a section where game-play is welcomed.  The girls find they have a common love for games, and with Midori's mentoring, they begin to cement firmer bonds of friendship which enriches Miki's life, much to the pleasure of her family. The strengthening of friendships around the stimulating effects of gameplay is the main thing about ASDC.   As we learn of Midori's dream of becoming a game-author, as we wonder how MIki will break out of her smothering introversion, as we watch Aya mature to be a more level-headed ... hey, wait, that's not happening! ... I appreciate the thoughtful interplay of personalities warming up to each other.  ASDC might be just a 12-episode season and done, but it is a drama worth watching. And please, I would love to see the theme songs for the series (beginning and ending) subbed.  I feel I'm missing something profound.

It's a fine show. Good even. But if I were to be directing this show. I'd have made the game developing the main driving force of the plot. As it currently stands the story is disjointed. It'd be much more interesting if what happened in the year actually affected the game. But, it's only them playing. With a bit of variety here and there. It's okay, but It could be better. Also the romance either you indulge in it or you don't. Right now, it's vapid, there's nothing there it's a waste of screen time. 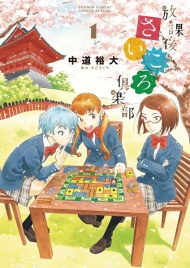