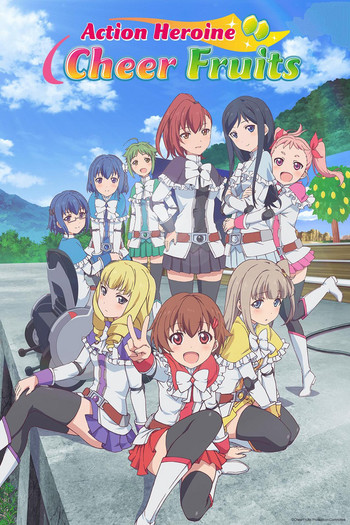 Cute girls doing cute things, aiming to save something close to their hearts through their actions in the community. In Love Live you have the girls trying to save their school from closure by creating an idol group whereas Cheer Fruit is about saving their city hall through gathering money and popularity, through action shows featuring superhero-like characters. Both follow the cute girls do cute things, with little drama but both are similar. So if you enjoyed one, you might want to check out the other.

Both shows investigate the lives of growing idols and the struggles that they have to go through to reach the top, although both focus on different types of idols they both display similar messages. The characters are quite similar and the general build up in the storyline is similar as well.

If you like shows where cute girls will do things to promote their towns look no further than these 2 anime. Sakura Quest is more mature than Cheer Fruits by far.

Both are CGDCT shows centered around team performances with stunts (cheerleading/mock battles) and follow a group of HS girls gradually building a new unit, learning new skills and etc. A cheery and lighthearted atmosphere in both, although Action Heroine has a little bit of drama too.