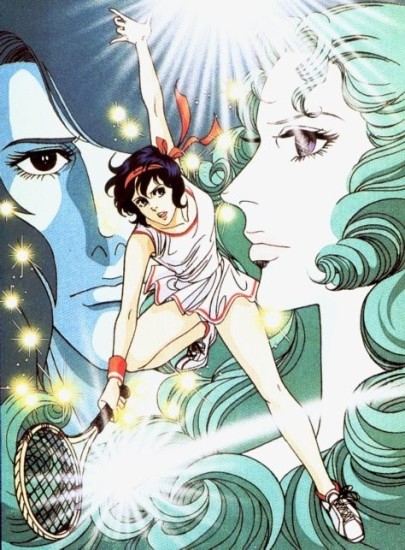 Initially, it wasn't bad at all. As I started watching it, I was sitting in my room, delighted to see what would become the oldest anime in my 'watched library' (Macross now being #2). I giggled with it occasionally, and I laughed at it more than occasionally for it's hilariously outdated visuals and audio, and just how little the shoujo genre has evolved since the late '70s.

But then, after about 5 or 6 episodes, something started to change. It grew in... stupidity, and began repeating itself. Story lines and plot point which had already been resolved - with major climaxes - were for some reason ignored that they had been resolved. Both by the characters of the show, and seemingly the creators.

And as if that wasn't enough, it seemed as if the writer thought to him/herself "I don't think our leading lady is insecure and whiny enough". Which honestly, she kind of was. But from this point on, those aspects are magnified by a multitude. Whenever Oka isn't admiring one of senior players - which she often does - you can replace about 90% of her dialogue with self-pitying whining. It doesn't take much for her to go from happy or proud to sobbing like a trekkie watching Spock's funeral or me watching the final scene from Honey & Clover II.
Making a character emotional and having him/her cry here and there is not a bad thing. In fact, I prefer when characters are able to access and show their emotions. But having them cry for every little insult or set-back merely annoys me.

To be fair, she's not like that all of the time. And while her character development is there, it's limited to very last few episodes. Hell, Otawa grows more as a character than Oki. A few other character also develop a bit, but it's so miniscule for them that it's barely worth mentioning.

Since I've already clearly stated my opinion of the anime as a whole, I'll hastily name some more issues I had with it; The bitchiness of the background members of the tennis club goes from stereotypically amusing to tiring and stupid, since it's so old and the animations are horrendeous the tennis matches are sleep indulgingly boring, the amount of times Oki gets hit by tennis balls during practice should be counted as physical abuse, and maybe worst of all, there's no real goal for Oki in the series. The only things that could be labeled as goals would be that she and the coach want her to become better at tennis, and that is very weak.

In summary, there are only a few anime which have irritated me to this degree and it's not something one can simply blame it's age for. I cannot recommend this to anyone. Not a single person. And I'll give it the very low score of 2/10.