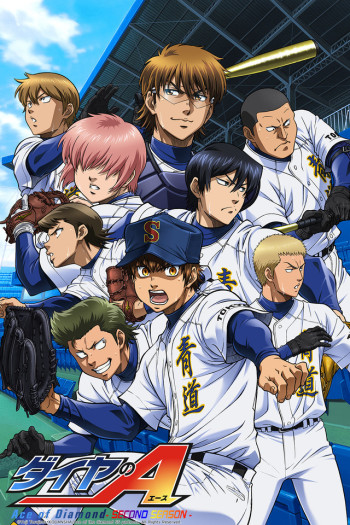 A lot of intensity and talking, personally I hate a lot of talking and sort of skipped through some parts but overall they balance it with fun times and comedic relief sprinkled around. I like how they don't rush his progression, although he remains op it's not so much that he can't get better, but enough that he isn't stuck at #20 all three seasons. he slowly makes his way up the ranks and his friendships with the other players grow like any regular team would, you have the people you don't like and some that you do but your friendship starts out superficial and in the most recent season we see how they understand each other more and get along better. Really good plot work.

Update: Finished. Story lowered from 5 to 3 because of the ending; characters from 7 to 4.

I'm writing this at episode 35 of the second season. If you've watched many sports anime, you won't be surprised by anything plotwise. It feels as though the story is stretched in an attempt to add depth, but I'd say that they've failed to do so. The characters still feel one dimensional at this point, and the little growth they've shown has taken far too long.

I feel that any successful sports anime must have three elements.

1.) A deep understanding of the game.

3.) An edge-of-your-seat sense that the characters are putting their lives on the line in every struggle.

AotD isn't delivering on points 2 and 3 at this point. I'm hoping they'll shape up in the future, effectively turning this lengthy run of tedium into an immense foundation for excellence... but I'm not holding my breath.

At this point, I'd recommend either waiting until the series is finished or letting it progress enough episodically to watch it in five episode bursts. Watching it one by one on release day will only cheapen the experience, as it is rare for enough time to elapse in the AotD universe during one segment to keep the viewer (me) interested.

In regard to the visuals and voice acting, AotD can proudly stand on the level that other anime this decade have set. That said, they don't do so competitively. You won't see AotD setting any benchmarks for excellence in these categories,  but it definitely delivers enough of the goods that these elements won't detract from the overall experience. You'll never have to pause and walk away because a lazy animator screwed up an important shot.

Anyway. Summed up, it's good enough to kill time with, but not good enough to invest in. I'd buy her a drink at a bar, but she's not getting my phone number.