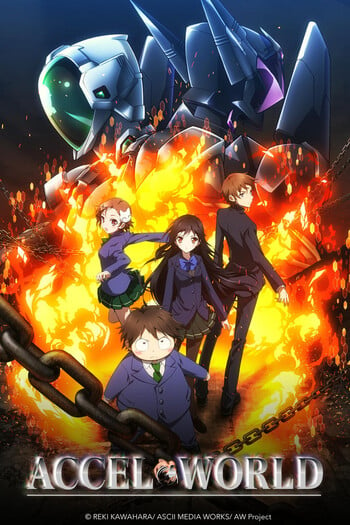 Haruyuki suspects that Cyan Pile is challenging Kuroyukihime within Accel World via access through Chiyuri’s neuro-linker.

Both the animes are focused on VRMMORPG Games, thou the protagoninsts are quite different, but both the titles offer a great dose of action and very immersive plot.

I see primarly Log Horizon and i loved it a lot, but also Accel World is a good anime, the "common factor" is the online gaming, in Log people become blocked in a virtual world and they start their live in it, in accel the online world is reachable when the characters wants and has particolaur characteristics.

Both anime are based in a type of game world which affects their real world lives. Whereas Log Horizon is an MMO of sorts, Accel World is based on advanced nerve gear (yes from Sword Art Online) and requires people to duel and fight in real time locations and what not.

Seven kids are enjoying their summer when suddenly, a digivice appeared before them, and the next thing they know, they are in the "Digiworld." There, they meet creatures known as digimon. There are evil digimon in the Digiworld, but they are not bad in nature; rather, most of them have been turned evil by nefarious forces. Each child had a digimon...

both accel world and digimon involve a number of kids having to fight in a digital world. in accel world though the kids are the ones fighting but in digimon they have partners that fight for them. both animes see the main characters trying to defeat the "leaders" in each world, in accel world its the Legion kings and in digimon its the Dark Masters. if you liked digimon and wish to see a more grown up/mature version then you would probably like accel world aswell.

22-year-old Ryouta is an unemployed good-for-nothing who spends his days living at home and playing Btooom, a wildly popular online game that's sold over three million copies worldwide. Alongside other teammates, Ryouta battles it out with others using powerful bombs and sonar that can reveal hidden enemies, and his dedication has earned him the title of...

in both animes the main character is very weak and unpopular in the real world, but are both incredible game masters. They use their skills as game master to over come obsticles through out the anime.