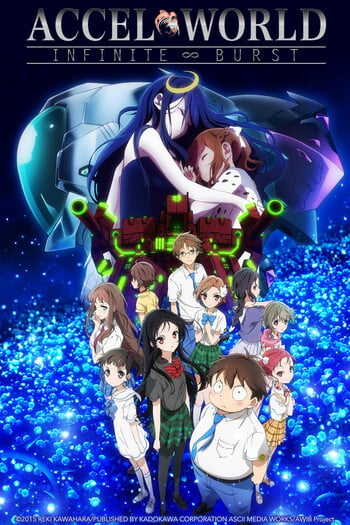 I really enjoyed the first season of accel world and the specials and OVAs. I was so bummed it didnt continue! I just got on and saw there was a new movie out and had to watch it! Saddly, I have not found a subbed version yet and had to watch it with chinese sub (cant read chinese). When watching, I only understood about 20-30% of what was being said, enough to piece together most of the conversation. The movie starts with 30+mins of recap (the movies is only 1 1/2 hrs). The animations look better than the original in my opinion, however I did like the original.As for the story, it doesnt really follow the same sorry as the original, and there are a few major differences that surprised me like the the girl in the wheel chair could walk! (that may have been in the originls or specials, but I dont remember it). ANyways, great movie in general, definately recommend!

The first half hour of this "movie" is a recap of season one.  Then it goes into a fast forwarded recap of season 2.... that's not out yet.  Many new chacters and it goes very fast, with lots of plot holes.  You can get the just of what is happening but it leaves so so much out that it leaves tons of questions.

Let's recap and recap some more.

Really is there anything as boring as watching the same thing over and over again? Sure there are things that don't loose their appeal but sitting through a narration of a story one has already watched 24 episodes of has got to fall under the definition of insanity.

Is there anything more upsetting then expecting a continuation, a side-story, a back-story, a something that adds and getting a plain recap? Perhaps famine, war, face-plants, wedgies ... there may be a list that rivals the prevalence of recaps in anime but the disappointment is none-the-less present.

Especially if you watch the movie soon after finishing the 24th episode, as this reviewer did.

If viewers are to "aim for the sky"* alongside Haru, Chiyuri, Kuroyukihime, Takumu and the others then they should be given something with value to give them wings.

If you're thinking there is something somewhere in this, an Easter egg or a new perspective on something, then your expectations will not be met.

While this movie does focus on the highlights of the series its nothing that couldn't be seen by watching the series and remains something that people who like condescend stories would rate high.

Everyone else would be better off skipping it though some may find it worthwhile as a refresher should a second season be created.