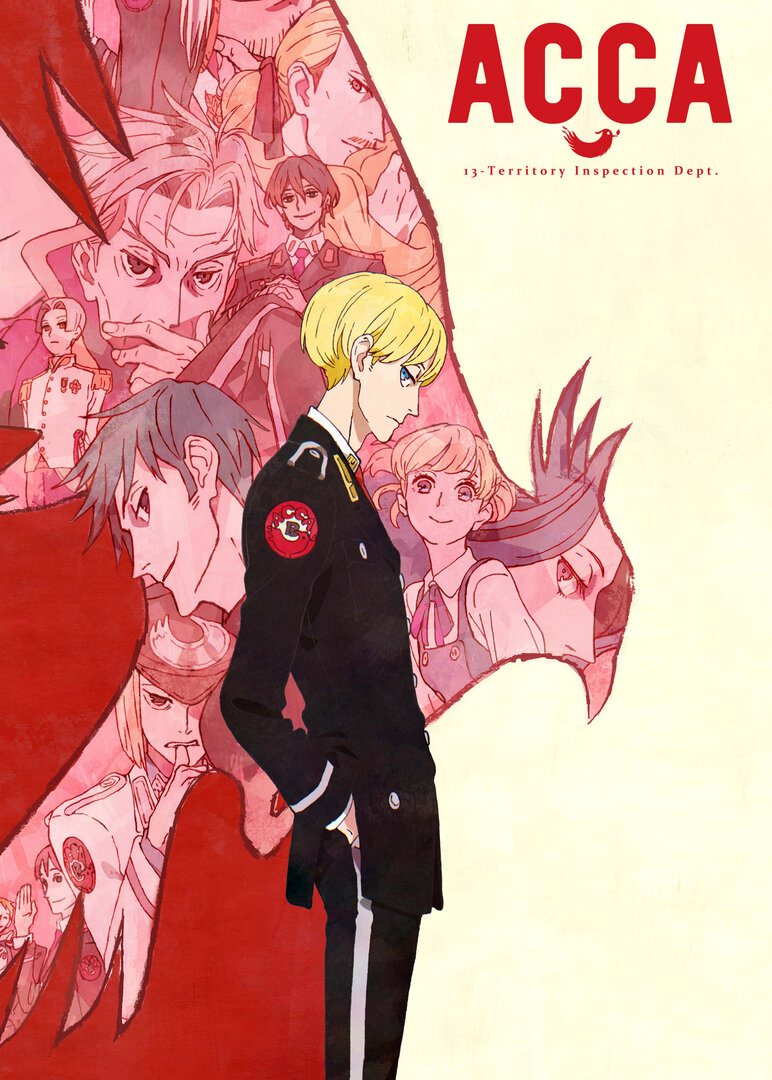 ACCA is a very strange show. The first half feel directionless. Our lead character, Jean, lacks any kind of drive that would make the story feel like it's going anywhere. However, it vastly improves once a reveal is dropped and the anime gets some kind of direction. In the end, it pulls off a great finish and ends on a high note.

ACCA's biggest problem is that, for a while, you don't really know what the story is. Sometimes, this is made up with great characters or through world-building, but Jean is too low-key to make a big enough impression up front and the setting changes too quickly to feel fully immersive. ACCA feels like part of a larger whole, but you have absolutely no clue what that larger picture is until there's some vague mentions of political unrest. Even then, you really don't know why everyone's watching Jean or if the political unrest is a major plot point, or just another part of the setting.

Thankfully, a major reveal gives the story direction. Everything makes sense, and the anime vastly improves. While the first part is pretty weak, the second part is incredibly strong. Unlike so many anime, ACCA has a solid and satisfying ending.

The character design looks a little different from today's standard style, but they're still interesting to look at. Personally, I like it when an anime has it's own style, so I liked ACCA's designs. If you liked how House of Five Leaves looked, you'll probably like this style too since the mangas they're both based on are written by the same woman.

The last episode had a clear drop in animation quality, but otherwise, it was solid all around.

I never struggled to hear anything and none of the voice acting irritated me. Everyone suited their character well. The opening and ending songs are both highlights. I've yet to hear the soundtrack, but it sounded pretty interesting at times. Overall, no complaints here.

ACCA's cast is one of the most chill and low-key in anime. It's a refreshing change from a medium full of zany and over-the-top characters. Because the characters are subtle, it takes a few episodes to get a good feel for them. This is amplified by the fact you're unsure what any of their goals are. By the end, I found I liked most of the cast. And even when I felt more neutral towards them, I never disliked or found any of them irritating.

I'd recommend ACCA, as long as you have the patience to get through the first handful of episodes and believe the promise that, yes, it will all come together and when it does, it makes the early stuff almost worth it.

The animation seemed a bit weird in the beginning, but after a while it grew on me and now I think it matches the anime perfectly. Great use of colours and scenery, adding up many different worlds (districts) in a way that none seems bleak. Every place is teeming with life and likeable side-characters. The story is top-notch and the twists are real. I'm a bit biased because it fits really well into my anime taste, but, overall, I think it is the single most overlooked anime of the year so far.

First off WHERE THE HECK IS THE HYPE FOR THIS?

This deserves so much more praise than it is getting because this is a great anime, well not great but it is really good. It had a good story line, although it started off quite slow but towards the middle it really got you going, but just because it was slow DON'T STOP WATCHING ! Also has some killer plottwists that will really get you going.

The animation for this is so unique and beautiful, really has some nice aesthetics going for it. And I am not shitting you when I say eat before or while you're watching this because man, I was so hungry while watching this, like they eat delicious looking food right in front of you and you just hurt, so bad because food.

Ooh I quite enjoyed the opening, not just the sound the colour, actually when I think about it they both complimented each other quite nicely, ultimately making it a likable opening. There are a lot of contrasts, and bright colours used, which adds to this anime's beauty.

Please watch this beauty, it really is gold

The visual style is probably the shows strongest point and proves that not everything needs/should be made in the "generic anime" style. But Acca has a good story to tell too, albeit a bit confusing for the 1st half and Acca also has excellent fujoshi bai... I mean characters.

The ending was a bit unsatisfying, but probably better that it didn't go the other way.

Great animation, not much movement but the style stands out and will be remembered for a long time.

Characters are great, most don't get much screen time, even some important ones, but such is life.

Acca 13, so having 12 episodes instead of 13 was a reference to the state of things at the end huh.

Damn fujoshi bait at the end, Jean and Mauve would have made a good couple, but no gotta pair him with the child hood friend Niino.

Ive watched a ton of the usual shojo and shounen anime these past few months. This left me with a need to watch something more mature and intriguing. ACCA 13 was not on my radar. I (by complete accident) started watching it. And i loved it.

Its really interesing and fun to watch. Especially if you love worldbuilding and intrecate imaginary politics. The animation itself is pretty stylish. If you liked how Carole & Tuesday looked, im sure you will like ACCA 13 too. The best way to go into this anime is to know nothing about it and just start watching. Im so glad I gave it a chance. Hope you will too!