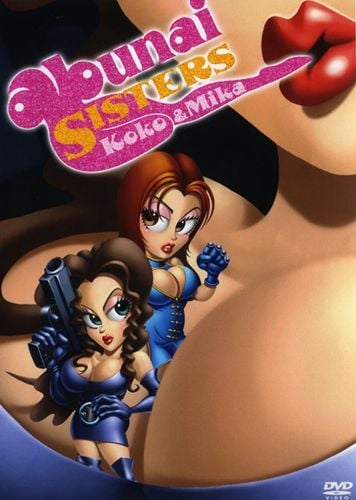 Busty, shallow Koko and Mika are two famous celebrities whose lives are anything but normal. Even a typical vacation day to the beach can mean potential disaster for the pair, as sinister forces want to get their hands on the butt-kicking beauties for their own reasons. Luckily for Koko and Mika, their breasts manage to help them out in any situation, whether vibrating when danger is afoot, or blowing up to an immense size to serve as air bags in a car crash!

This has got to be one of the saddest excuses for an anime I've ever seen in my entire life that I literally bite my tongue for calling it an anime. Sadly though, and here is a bit of akn known fact about me, once I start a show I do everything in my power to watch the whole thing first before judging. *takes deep breathe* First let me get this out the way... if something like, I don't know busty women, with a storyline that doesn't even make any sort of sense is written down on paper, it should be shredded immediately, then bang your head 20 times on a marble table while promising yourself to never make crap like this into anything more than a mere dream gone bad. *Phew* Now that that's out of my system, lets get to the actual review shall we.   Story: I nearly barfed as I sat in my bed trying to digest this "anime" storyline. I did get the gist of it but my brain hurts too much to try to explain things. Moving on...   Animation: I love voluptuous women as much as the next guy, but seriously this was the only that this show had going for it. Of course I think that the animators seriously did do a decent job, even though there were some drawbacks in production value. To be honest though everything seemed really cheesy in a sense that I got this nostalgic feeling of "it's been done already" every single episode that I watched. I think the animators did just what they intended but it didn't come out the way they wanted viewers to see it. That's my story and I'm sticking to it.   Sound: Surprisingly I like the sounds from this show, which is surprising coming from this piece of crap. The soundtrack was a bit laid back, but the explosions, shots and other worldly sounds weren't too bad. I wasn't expecting too much from the voice actors but I was a bit surprised that they had a team that did a pretty decent job. Although it didn't help this show at all to be blunt.   Characters: Ok let me first start by saying that I love women and all of their fine glory in every shape, way and form. Don't believe me you can ask one of my closest friends who knows me more than my family does. Anyway, Koko and Mika are a pair of hotties who also kick major arse whereever they go. They are seemingly stalked by some noob who's name I forget at this point and the shite hits the fan as my brain just imploded thinking about the everyone else that was brought out in this show. I felt little connection to any of the characters outside of a minor remembrance of some old eechi manga I borrowed from a friend a while back.   Overall: I DO NOT recommend this piece of crap to anyone with half a brain. If you're watching this, drop it asap as your brain will feel like deep fried mush after watching this trash. If you;re curious then feel free, but I'll leave that up to you. Well dear friends that's all for now, I'll be back with another review, hopefully nothing like this show will pop up on me again. Oh and by the way, you'll have more fun gouging your eyes out than watching this piece of crap.

Um… this one was pretty much seems really more like Hentai without the sex. The episodes are really short but just seem really really stupid. I don’t understand what exactly the ‘gag’ part is in this. All I see is two girls with large breasts doing a bunch of jumping and crawling around, with one acting like she’s jerking someone off as she is shaking a bottle of Champaign. This is not funny! It’s just sick and wrong looking. The animation looks cheep but I can tell they did put a lot of work into it, even if it does seem like they shouldn’t of. Everything looks pretty plastic and toyish, the girls look like Brats dolls with large eyes and big heads. Their lips are way too puckered and make them look like they had a lot of plastic surgery. The movement is somewhat alright, I didn’t notice to much problems with that. Music and their voices seem like they were best for a porno. In fact, if you are old enough, close your eyes and just listen to it and think what they are doing. Ya… It’s just not my thing to have my shows full of that stuff.