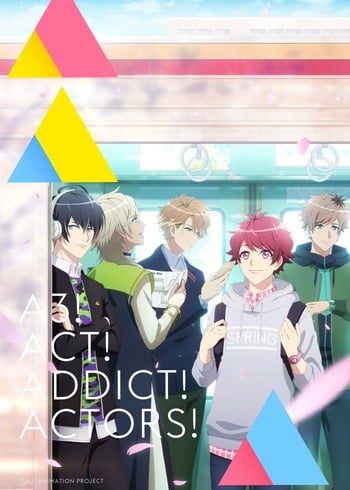 The Mankai Theater is plunged in the depths of bankruptcy, after the missing manager's wherabouts are unknown. To save the theater from being wrecked, the manager's daughter must create acting troupes symbolizing the seasons of Spring, Summer, Autumn, and Winter. These troupes are scheduled to perform during their designated season in alternating rotations.

After watching almost the entire first season, I witnessed all the characters going through steady but tremendous character development. Each theater troupe starts off with amateurish actors who lack professional theater experience, and can barely act. But as the show goes on, they work hard to overcome their shortcomings. A previous theater member is able to pinpoint each character's weaknesses. Each troupe starts off from scatch with conflicting values, and personalities. But from watching the show, I saw how even the most arrogant characters who only think of themselves...blossom in to a good leader, or mentor. Surprisingly, I was able to relate to the simple messages that the show conveys. A group of inexperienced actors who could barely get along in the beginning learn to cooperate, work together, and find a stage where they belong. During the main show, they cover for each other when they are in trouble.

A catchy Japanese pop-themed song plays in the background.

Ahhh! The anime is super super soooooo great! I love the game, and this anime as well. The characters, story and animation is well-made and great! Just one sad thing, WHY DOESN'T SAKUYA APPEARED much?!!! I love love sakuya but his appearence was so less. I hope he has more appearence in next season. Also, regarding the troupes, Spring troupe is so much good than summer troupe. I mean summer's not too bad, but I think sakuya is a pretty cute-fun leader.

I personally think that this anime is underrated.

I liked the art style, character setting and character development though the sound effects were nothing out of ordinary. Considering that it has 12 episodes only, I think the story progression was decent as well. I liked how every character had developed with the flow of the story and how the story was not following and orienting around one character only but all of them.

Gotta watch the next season~

I love it! it's super funny and everyone had their own problems but it was sovled so it was great!

As someone who's played the game and knows what happens in the story, this anime does it justice. Like the divorce act they did for Itaru. They added new scenes which made it interesting and it's always fun to try to spot future Mankai members. The plot is interesting as it's the classic save the place from being shut down. Normally in movies it's a camp or a school, this time a theater. The characters are really interesting and for being a big group I love that the interact with each other instead of one specific group. They make you want to know more about their backstory that even the game has yet to reveal.

Also, I recommend playing the game. You do get spoiled but also learn about scenes in that anime being different from the game as well as one cut out. The game is translated in english so anyone can play!