A Tree of Palme 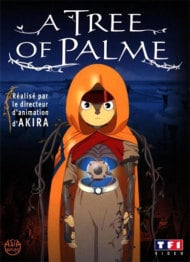 Palme is a robot crafted from the wood of a rare tree; though he isn't a real boy, he wants nothing more than to please Xian, the wife of his master. Upon the eve of her death, Palme ceases to function, until one night he is brought an egg from a mysterious woman. "The Egg of Touto must be returned to Soma," she says, and vanishes into the night. Now, with the help of newfound friends and allies, he must travel to The Below to return the treasure, before those who would steal it destroy both him and his companions.

This anime is filled with emotions as the wooden puppet tries to become more human with his friends helping him. The scenery of the planet is very imaginative and unique. The storyline twists and turns, though sometimes it is a bit slow. The music is hauntingly beautiful. There are a few fights and guns, though not too much gore. Some parts did remind me of Ghibli films.