A Spirit of the Sun - Reviews 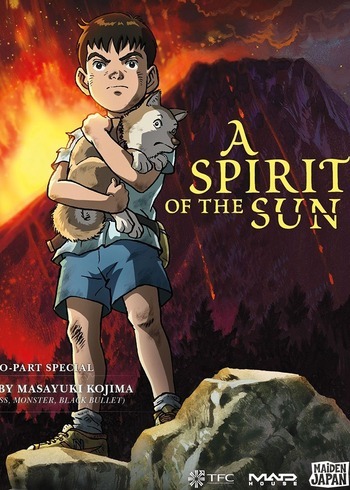 As scenarios go, Taiyou no Mokushiroku's is packed with potential. Japan is rent asunder by the awesome forces of nature, literally cleaved in two by a succession of earthquakes. Half is given over to Chinese control, half to the United States. If you're thinking to yourself "this would be a great basis for a political intrigue epic, set amidst near-apocalyptic devastation" then I would agree with you. The creators of this film, I regret to inform you, would not.

Instead - and quite inexplicably - the spotlight hovers over the island of Taiwan where some of the Japanese survivors live as refugees. Although I'm sure the story would still be salvageable at this point, Taiyou no Mokushiroku forgoes any possibility of this and descends into a pit of moral absolutes and preachiness. Indeed, the main character, Genichiro, is so frustratingly and permanently on the side of right that it prompts another character to ask him whether his sense of justice has any limits. The answer, I would venture, is no.

In addition to this, he acts as a human bridge between the polarised good and evil of the film's universe. After a brief lecture or dash of common sense morality, even the most moustache-twirlingly diabolical of villains, it seems, are brought to see things from his perspective (although this is probably due in equal measure to their having no credible motivation for misdeeds in the first place). Because of this and because his unwavering righteousness sees him through every situation with so little effort, any suspense is quickly tossed aside by a realisation that Genichiro will overcome whatever obstacle is in his way, usually in the dullest manner possible.

When it comes to animation, the film is really something of a mixed bag. There are moments of excellence, certainly. The lighting effects, be they from flashes of gunfire or from the blue and red lights on the police cars, are marvellous. Similarly, the general destruction caused by the earthquake is animated with skill, and the CG element makes it feel somehow more real. However, this is let down by some sloppy work in other places. The crowds - well done on the whole - seem to move on conveyer belts at one point, Zhang hovers in the air while dismounting his motorcycle and another incident sees someone momentarily teleport halfway off-screen before abruptly returning.

Taken as a whole, however, the animation is satisfactory. The backgrounds are easy on the eyes and the character designs are sharp and varied enough that it is possible to distinguish between the surprisingly large number of characters.

The background music is by and large the sort of orchestral fare you might expect to hear in a Hollywood war film. It's a bit stirring, it's a bit epic, it's a bit sad. Whilst this isn't a problem in itself, the score seems intrusive on occasion and is certainly overused. During perfectly banal moments, the viewer is assaulted with a wave of cellos and violins that seem to demand an emotional reaction which the scene itself is incapable of providing. Consequently, by the time something happens which does merit a modicum of sadness, the music has lost its impact.

In terms of voice acting, Taiyou no Mokushiroku resembles some kind of all-out manliness contests with grunts, shouts and rolled rs aplenty. Aside from a couple of more reserved performances, and a very light sprinkling of female characters, the voices all begin to sound the same and the only way to work out who is speaking at any given time is to watch for lip movement on the screen.

Taiyou no Mokushiroku's cast is far too extensive for a three hour film and many are faceless as a result. Those that are less bland are characterised almost exclusively by whether they're a good guy or a bad guy. I believe I already mentioned that Genichiro is portrayed as being so moral and non-violent as to make Martin Luther King and Gandhi look like Beavis and Butthead by comparison, and I should add that those who join his side are equally one-dimensional. As for the villains, none are given much of a back story, making it impossible to grasp their motivations.

Taiyou no Mokushiroku simply strikes me as a complete waste of a good idea. It contains several strands of story, any one of which could have been drawn out into a relatively interesting three hours. What we get instead is a hodgepodge of half-ideas woven together by a strand of simplistic, black-and-white morality, which will do more to annoy than to inspire. Although it is far from being terrible, Taiyou no Mokushiroku is an unsatisfying experience as a whole and one that I can't recommend in good conscience.