A Sister's All You Need - Videos 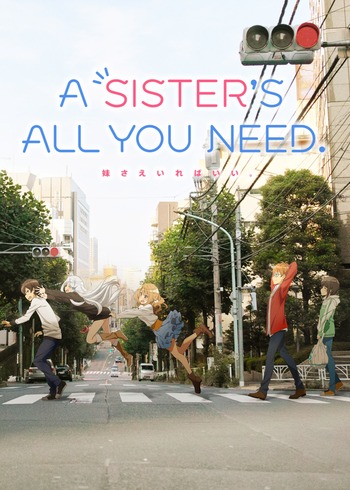 Itsuki is nearing his final deadline for volume 5 and flees from his editor, Toki, however he is immediately caught. However, Itsuki manages to escape when he runs into Setsuna and they both go to a hot springs. Setsuna felt like he was in a slump and wanted to see some asses to get some inspiration. But when they get to the ryokan with the hot springs, Itsuki witnesses something horrifying...

I Only Need a Little Brother Who Can Cook, a Beautiful Naked Girl, and Friends I Can Relate To.

If Only a Miracle Would Happen

As Long As It's Research

As Long As You're Working.

All You Need Is to Write Novels.

Having Your Media Developments Go Well Is All You Need.

Adventure Is All You Need.

All You Need Is Love and Friendship.

Nudity and Underwear Are All You Need.

A Lack of Problems Is All You Need.

Becoming the Protagonist Is All You Need.

A Sister's All You Need?

Anime-Planet users recommend these anime for fans of A Sister's All You Need. All available to watch right here, right now!

Masamune Izumi is a high school student who writes light novels. Sagiri Izumi is a shut-in who never leaves her room. A year ago, she became Masamune’s little sister. But one day, Masamune discovers a shocking twist—The artist "Eromanga Sensei," who has been drawing illustrations for his novels, is none other than his little sister...

The premisis is pretty much the same where the MC has a little sister complex, their also a writer so if you like one then it's a safe bet you'll enjoy the other

Eromanga sensei is about how the parents got separated for some unforeseen event and remarried, and the mc ended up getting a shy little sister both of which are not related by blood. And they both work in the eroge/romance industry of writing. These two just have so much in common I mean look at the tags if you're not convinced lol.

Both series feature the MC as an eroge romance novelist who also has a little sister complex. Both MCs develop somewhat of a romantic relationship with their little sisters (who are not related by blood), and also develop good working relationships with their collegues in their industry. They also have the typical run-ins with their publishers.

Kyousuke Kosaka is a normal teenager with average grades and an average home life, but when he finds out that his overachieving younger sister Kirino has been hiding her vast anime and eroge collection from their unassuming parents, his world turns inside out! Now, having promised to help his formerly distant sibling navigate her two distinct...

Another siscon anime. The story is more sister-related-scenes, Imouto sae ireba ii is more on fun and friendship.