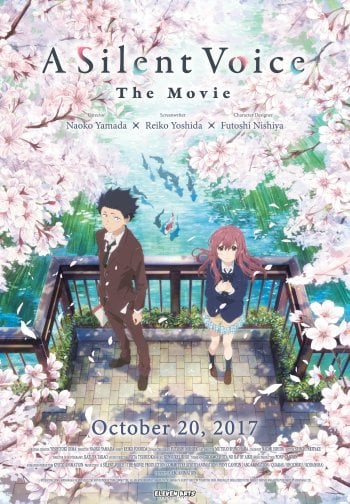 Forget you ever heard of this film. Go read the manga.

It’s an overwhelmingly minority opinion, I know, but A Silent Voice is a slapdash, choppy, depthless summary of a remarkable, heartrending story of the despairing consequences from the most basic of our childhood stupidities: our ignorance of empathy. It’s a brilliant, brilliant story--and it deserves better than what’s in this film.

A Silent Voice is a series--and I emphasize series--based on character progressions over a period of months. And for a fair number of characters. Is it adaptable? Absolutely. Closely adaptable? No--at least, not as a movie. There are too many moving parts, too many characters with their own intertwining storylines to cohesively tackle in two hours. There just isn’t space for it--at least, not without drastically trimming plot and character alike.

Rather, what we get is an attempt to faithfully hit all the big story beats and images from the manga, and, in so doing, the movie overlooks its first duty as a movie: tell a good story. Everyone and everything is so undefined, here, that I’m not sure there was even a recognizable arc to the story.

It’s not unwatchable, but it may as well be.

This movie may sound like another cliche scenario but it's completely packaged with only original goodness, The animation was one of the key element for the success of the movie each panel used vibrant and different colors to sink that scene into our heads deep. The author made a clear distinction between love and hate characters, what she wanted u to hate and what she wanted u to love and that makes it enjoying this movie, to finish off our destroyed heart the movie finishes off with Aiko, the ending song make you have flashbacks about the movie and I reckon it's a great way to end the movie.

This review is very late because of one big reason: the release of Koe no Katachi in Philippine cinemas was delayed. Today, May 10, is the first day of its showing in the Philippines and I have no regrets watching it!

Story: Realistic. Let's face it, we have people like Nishimiya around us. All of us don't do these things but sometimes we ridicule them, sometimes we ignore them (and ignoring them isn't doing anything good at all, too). The story of Koe no Katachi shows us how to understand people like them. There are only a few animes out there about deaf-mute people and this is a jewel that shows the reality about it: fitting in, being bullied, contemplating on life, thinking about ending one's own life, et cetera. However, I have difficulty understanding some parts of it since I don't know sign language.

Animation: I really can't say anything about the animation because to me it's already really, really good. Though it can be annoying sometimes, I really liked the X-marks on the people.

Sound: The BGMs in each scene fit really well, but I think they weren't enough to get tears out of me, sadly.

Characters: The characters were very relateable. Just like Ishida, I have difficulty looking at people straight for some reason. Maybe it's because I have the tendency to run away (like Sahara)? I also think that I am self-righteous just like Kawai. Anyway, leaving comparisons to myself aside, the characters developed quite well. The scene at the end where they met at Ishida's school festival wrapped everything up. The movie also shows the sacrifices people do for their differently-abled loved ones.

Side note: Thumbs up to the voice actors, especially Nishimiya's. For the first time I finally heard a realistic portrayal of a deaf-mute in something that's not live action. Everyone did a great job of letting the characters' feelings reach the audience.

This masterpiece definitely deserves to be rewatched in the future!

When work took me to Japan recently I had to catch this film in theaters, never mind that I can't speak Japanese and so far there are no legal translations (Tracking down the Shinjuku Picadilly theater wasn't easy either). I've read the manga so many times that subtitles or a dub were unnecessary, though I suppose such blatant fanboyism does undermine my objectivity. Well, here's the best I can do to give a balanced review.

In order to accomodate the demands of making a feature film, the storyline of A Silent Voice has been streamlined. The main arc revolving around Shoya and Shokko is largely intact, but to keep the film moving and focused a lot of the side arcs were drastically trimmed or removed (most notably Tomohiro's home-made movie. The movie arc was cut for the sake of the film, how meta is that?). Even with the cuts the movie clocks in at a solid 2hrs 10 minutes, so I can understand why the writers would be pragmatic and stick to just the necessary parts. As long as you go in realizing you'll be getting the 'movie version' of A Silent Voice you'll enjoy it.

Kyoto Animation on a movie budget. Need I say more? Well I probably should... The animation fludity is very solid, but this movie hits a home run on still images. The film goes for a pastel palette that gives it a very sweet and relaxing vibe without going overboard. There's a clever use of shot composition, such as often focusing on the ground and other character's legs while Shoya is talking, to emphasize his isolation. The way Tomohiro's trademark nervous shaking was animated was particularly amusing. Overall, the animation is very good.

The sound in this movie just plain works. I enjoyed listening despite not understanding more than one word out of one hundred. The voice acting is good, especially Shokko. The OST is mostly low-key, setting the tone with soft pianos and xylophones. However, it ramps up to 11 in critical emotional moments, particularly the climactic scene at the end of manga vol. 5 (you know the one). I was feeling tense in that scene and already knew how it ended!

You get more of the 101 version of a character rather than their full nuance, due to the more streamlined nature of the film's story. Unavoidable, and KyoAni did as well as anyone could expect them to. Still, they work well. It's in the nature of film to trade off advantages in visuals and sound for greater limitations on storytelling, so I accept this. Besides, the characterization and character growth is still solid.

I'm waiting with bated breath for this movie to be licensed and released in the USA. It's everything fans of the manga could ask for and an excellent film for those new to the story of A Silent Voice.

So I watched this movie that everybody hypes just a few months after the release of Your Name and it’s of course the next best movie of all times, just like everything that is new is the best whatever of all times. This includes My Hero Academia, even when it’s a watered down Naruto, and Naruto was shit. To its credit I do agree A Silent Voice is better than Your Name, since it doesn’t have time reset bullshit and amnesia nonsense, plus the main two characters spend some time being physically close to each other before the romance kicks in.

Other than that, there’s not much of a story going on in here and the cast can all be described in a couple of lines. Everything plays out as predictably as you can imagine it from the trailer alone, and if you are looking for pretty colors and an excuse for men that are 26 to feel what they felt deep in their deep feels, then it’s a fine movie.

I am of course not going to evaluate it based on how much I cried, which is what everybody else is using these days as evidence of quality; the more he cries the better a movie is apparently. If I go by this logic then A Silent Voice is terrible because I didn’t cry nor felt anything else once it was over. Unless boredom can be included, which would count against it.

The reason for that is simple. There was nothing relatable as far as I’m concerned, since I grew up watching giant robots and space armadas blowing shit up. The setting is for the billionth time about bland high schools, just like 99% of every other anime that is coming out today.

And it’s about bullying, which is something 99% of school anime include at least once. Was it looked into better than usual? Yes it did, since it had repercussions. Not that it was amazing as far as theme exploration goes; it’s still fairly silly, just like everything that happens in such stories.

I was also bullied in high school for being the weird guy who watches anime and doesn’t like sports. Do you what I did? I kicked the crap out of the bullies and then they left me alone. I didn’t transfer to other schools, I didn’t cry about it, I didn’t try to kill myself, and life went on. But then again that was a different time and a different generation. We were all manly men doing manly things back then, and not the current oversensitive 21 year old manchildren this movie was made for.

What we get instead of a glorious post apocalyptic story about cyborgs and transhumanism, is a deaf girl that is cute and shy so everybody would want to protect that smile, regardless of her not having any talents or much of a personality. Oh, and she also tries to kill herself because of first world problems… in high school. This sounds really serious, doesn’t it? But it’s ok, since the bully jumps in and grabs her midair, something which is extremely improbable to happen successfully.

And if I have to use the word improbable, means that the whole thing is cheap, forced, and there is nothing real about it. The characters are not relatable, they are just cute and cry a lot and you cry along with them regardless of how unbearably sappy the whole thing is. We are not even given any reason for why the bully and its victim had feelings for each other. I mean, why would you love the guy who tortures you? I still hate the bullies of my high school days even now, so I don’t find this relatable at all. Unless the Stockholm syndrome can be used as head canon, this whole thing is there for forced drama.

And I might as well inform you that from personal experience dealing with deaf people is exhausting. I had a friend who was gradually losing his hearing as time went on. We reached a point where I had to be yelling the same thing 3 times. It was such a bother I stopped talking to him after awhile. And yet there is no such problem in this movie, so once again it’s completely unrelatable as far as I’m concerned and why it’s the most terrible movie ever made because it didn’t make me cry. Using that logic doesn’t sound very creditable anymore, does it?

But hey, look on the bright side. It’s better than Your Name. Hell, it’s better than Anthem of the Heart, which was also about a handicapped girl and lots of vomiting high school shenanigans. Well done A Silent Voice, you are the least awful of these three.

And if you think all it takes to love the movie is to be an emotionalfag, you are wrong, since there are many who hate it because it’s not identical to the manga. You know the drill, anyone who didn’t read the manga has no idea what a masterpiece it really is. Not that I give a big enough damn to bother reading it, just letting you know what the mangatards are all yelling about, and why to them A Silent Voice is terrible because it didn’t make them cry.