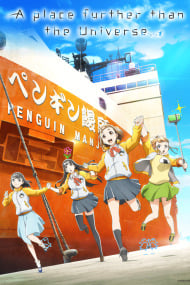 Remember that one time we went to Antarctica? A Place Further than the universe is a halfway-decent, forgettable journey from studio MADhouse. I'm no fan of CTGCT anime on the whole, so it's nice to see one putting in a good deal of effort to be more than its base genre, even if it falls short of greatness. This anime has a lot of strengths that are outweighed by its weaknesses. It starts off very jarringly, with the first things I noticed being its ugly character designs, art that doesn't work with the backgrounds, shitty white lines around everything, general dullness in its color, and everything looking like it's made of plastic. The only thing that redeems this is madhouse's unavoidably decent animation, which is, as usual from madhouse, pretty damn polished. For me the art is its biggest weakness by far. The backgrounds all look really lame and uninspired, and they're the reason why I found it hard to bring myself to care about this anime right out the gate. It wasn't easy to look at. Fortunately it makes up for it well enough in story and characters. This anime is about girls going to antarctica. Note that it is NOT about girls BEING IN antarctica. The entire show is spent getting there, and rather than being a whimsical adventure where we all go to an exotic place, the show deals with the real life struggles of getting to that place, especially for girls that young to get there. The show that looks shallow as hell actually ended up having some really good character drama. It's the situations that come out of these "cute girls" doing "cute things". They deal with a lot of different subjects, such as rumors, responsibility, bullying, ect in pretty mature and grounded ways. The best characters are the main girls, who each have their own reasons for going and their own dreams. Their development isn't really about going to antarctica, but their character arcs and how going there resolves each and every one of them. Every approach they take to the idea of raising enough money, meeting the right people, and getting the correct equipment and experience needed to go to antarctica is pretty grounded in reality, so it's easy to see the writers' passion for the subject and the story they wanted to tell. You get to see everything they go through in a not-too-boring way which makes it great when the payoff comes, especially being set up by backstories of the numerous adults they meet and the emotional stakes riding on it. The climax of the show is dealt with in a very unique way. You feel the weight of them actually getting to antarctica in every way it shows you, from the perspectives of all the main girls, and it's a life-changing experience for all of them. That about does it for the good parts of the show. The sound design is pretty mediocre. They have a good amount of insert songs but not all of them are used well. I got into a few debates about the use of a few of them and after much overanalysis i've come to realize that I just don't like the music in this show. I don't like the OP, ED, the insert OST, any of it. I don't think it fits the show too well, and it definitely doesn't always fit the scenes they use it in. Sometimes there will be an emotionally climactic scene and they'll play lighthearted music, ECT. There's also the humor. The show tries to keep you on your toes and interested in the conflicts and situations by placing humor in between, of course this being a CGTCT show at heart the tone relies on the quality of that humor, and it almost never works for me. It made me laugh once, and it tried to make me laugh a hundred times. I really don't think it did its humor well at all. Overall its decent, it has many flaws and things to complain about for me, but a lot of really good moments that make it worthwhile if you can get past them all. For me though, since i always put a lot of stock in the presentation of an anime, it's a solid "OK".

This was a delightful slice of life story about four girls who con there way on to an Antarctic expedition. It's a story of friendship and bonding. The animation is very good. The storyline is great and above average. This is a G-rated anime that I would let my nieces watch becuase it's girl power all the way! 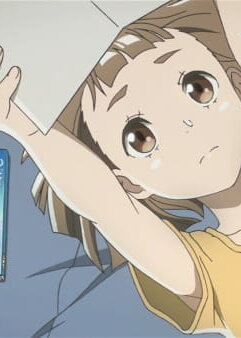 A Place Further Than the Universe: Yokoku 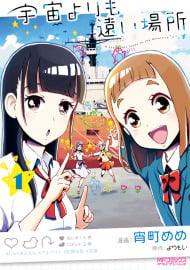