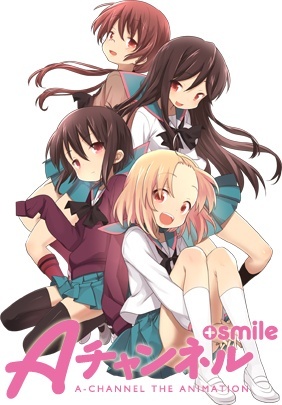 Both series revolve around the lives oh high school girls and have hinted shoujo-ai in them, Yuyushiki being the far more blantant of the two with the shoujo-ai tropes. Both series share some similarities in the particular art style they use. Large heads and smaller bodies with expressive faces.

Both series are comedies that center around a small group of high school girls as they go about their everyday lives. There are shoujo-ai moments littered throughout them both, with Yuyushiki being far more blatent in that regard. Yuyushiki is a bit more original in its comedy and interactions than A-Channel ever is, with the latter seemingly comfortable with sticking to the usual genre staples.

If you're looking for another lighthearted schoolkid comedy similar to A-Channel + smile where not much happens, check out Yuyushiki as well.

Both series rely on slice of life comedy and hinted Shoujo-ai moments with cute girls. While Yuru Yuri is by far the more blantant in pushing girl on girl action onto the watcher than A-channel is at any point.

Both shows follow a group of cute chool girls acting cute, with plenty of yuri mixed into the action for good measure. Yuru Yuri being both considerably more blatent with the yuri, and the overall better show, but if you enjoyed one the chances of you disliking the other are pretty slim.

Both series revolve aroudn the lives oh high school girls and have hinted shoujo-ai in them. It also shares a voice actress between the two series and the content is pretty parallel to each other with many characters having similar personalities to characters shown in K-on.

Both of these slice of life comedies center around a group of cute high school girls spending their days doing cute things.  K-On! is the better show of the two by far, so if A-Channel was a show you enjoyed then you should have a great time watching K-On!

Both series revolve around the lives oh high school girls and have hinted shoujo-ai in them. Both series share some similarities in the particular art style they use. Large heads and smaller bodies with expressive faces.

The art style in both shows are pretty similar, as are the shoujo-ai undertones that are always present. Both series also revolve around a group of high school girls and the various things that happen to them during the course of their day. Neither show really shows too much in the way of originality, but if you enjoyed one the other is unlikely to disappoint.

Both series revolve around the lives of high school students. While acchi kocchi has actually got male characters running around it still has a far more promintent female cast. Both series share fairly similar artstyles with large heads and small bodies coupled with large expressive eyes.

If you liked the schoolkid comedy antics of A-channel + smile and are looking for something a little more slapstick, check out the far superior and classic Azumanga Daioh.

If you're looking for a less low-key schoolkid comedy about girls and their daily lives, Hyakko is a decent one to check out.

Each of these shows are cutesy schoolgirl comedies with a pretty silly sense of humour, and a fairly likable cast. The biggest difference between the two is that while A-Channel has som eimplied yuri moments, Sakura Trick is a full blown yuri-fest from the first minutes. Regardless, fans of one should at least check out the other.

When Mugi gives the girls some souvenirs from one of her trips abroad, the members of the Light Music Club decide that what they all need is their own trip overseas. Having just returned from the summer festival and with college entrance exams looming, the gang decides that the best thing to do is to wait and have their trip after graduation as a special retreat for the whole club. With the prospect of something to look forward to, Yui, Mio and the others all begin excitedly planning their vacation, but first they need to sort out their passports and decide on somewhere to go.