A Certain Magical Index Movie: The Miracle of Endymion - Reviews 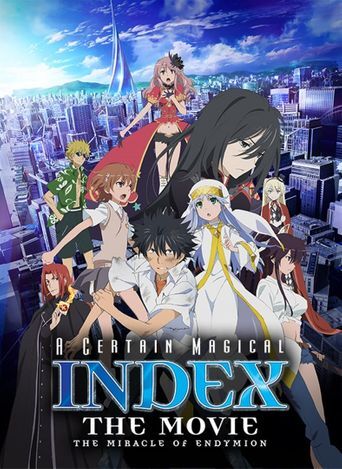 Let me begin by saying it was great to see all those characters again, well except Index.  Index is even more of a pointless dullard in the movie than she was in the series.  I wonder if they can explain why a nun is still living with a male student?  LOL.  All she does is eat and bite Touma.  There is hardly a thing to her character and never was.  She is no competition for Misaka as the single best lead and female character in the show or movie.  Basically the movie in a roundabout way is not even that original as it essentially retells the series "A Certain Magical Index" with a few plot changes and character changes.  Arisa takes on Kaori qualities but is pursued by multiple factions just like Index.  Stiyl at one point flat out says that she is a threat to the balance between the magic users and espers, just like Index was in the series.  Unlike the series though, this movie is a bit of a dull repetitive turn and appears to have been directed by the same guy who directed X-Men 2, as in both cases, the director did not seem to know what to do with the entire cast of characters under their watches.  Either there are too many major characters from the shows haphazardly introduced such that the direction gets confusing for whoever was responsible or those characters are just left standing around too much without any real sense of purpose or point.  Only Touma, Arisa, Shutaura, and Ladylee make any real impact in the movie with Misaka, Stiyl, Komoe, Kuroko, and Motoharu playing significant but sideline roles.  Index seems to have some minsicule but imposed and seemingly unncessary point to her part in the movie.  It is pace a bit too quick and cluttered compared to the series.  Shutaura and Arisa finish the movie with a Mikoto like problem in the latter half of Railgun season 1.  Again all these rehashed elements make it seem dull and repetitive with little to nothing new to offer to the world of A Certain.... (Magical or Scientific series').

Ladylee hardly seems logical or like a true villain though her disconnection from life is an interesting twist to her character.  Despite this she is perhaps the strongest factor in the movie being among other things, the most unique and original introduction to the movie apart from the series.  Sorry new characters Arisa and Shutaura but your abilities and character are essentially rehashed and recycled parts from other characters during both series'.  The ridiculous monstrosity known as the space elevator though kind of interestingly done yet is also done too similarly to at least 2 or 3 other anime series' use of the concept, such as Eureka Seven, of a space elevator and honestly not as well or imagatinatively done.