A Bridge to the Starry Skies - Reviews 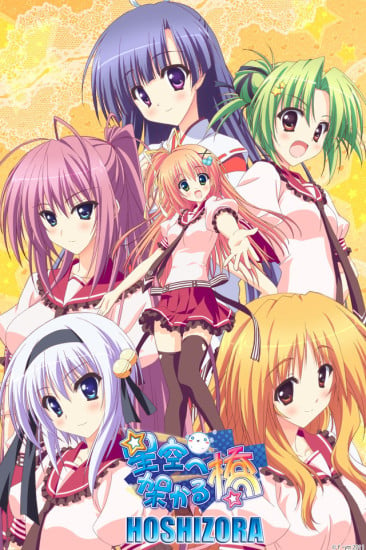 I can't say it's an exceptional anime, or at least not if compared to other romance anime that can be found out there.
It does, however, hold some good points which make it in fact appreciable.

Story - 6/10
For a quick and spoil-free plot, the story begins with Kazuma and his little brother, Ayumu, who transfer in this new town and soon a group of the most disparate girls takes form around them.
On the story side it's just a harem story, nothing more, nothing less. The main character, Kazuma, and several girls play this show on everyday events, while something grows between them. NO it's not *that* thing that grows. It's love.

By the way, appreciated was the reduced content of fanservice (despite the fact that it takes to anime an eroge). Well, they certainly did not spare anything when it came to drawing the breasts, still it was quite a serious story, nearly free of those stupid ecchi gags (and of the few ones in there, most of them were related to "kawaii Ayumu", Kazuma's little borther) that can be found is some other anime, and this aided to increase my evaluation. Just a little however... That's not enough in order to keep up an entire story.

Similarly, the plot develops mostly on calm discussions and characters, rather than shocking revelations and deep depressions, which on one side helps to pleasantly follow the story without too much emotional load, on the other side it does however reduce the pathos classic to romance story. Well, in the end they managed to build up an appreciable anime.

So, it's a 6/10 to the story. A "just sufficient" due to the scarce (if there ever was) originality and twisting elements in the plot. You will get the feeling on how it will end already in 3-4 episodes...

Animation - 7/10
Hard to say, it certainly does not match the level of some other anime. Still, it's not like I felt disappointed by the images. But something I felt missing is the fact that in some other anime the feelings of the characters could be percieved by the viewer even just from the animation, without the need of a single word. Sometimes it happened even while whatching Hoshizora, but not so often.

Sound - 7/10
Relaxing opening and ending, they're not however godd enough to enter my playlists.
Regarding the voices, some of them where perfectly suited to the character, some other... Mmhh... Were a little too childish (I mean how the voice was, not what was said).

7/10. Nothing really of note, neither in good nor in bad.

Characters - 8/10
Quite rare in romance story, the male side actor, Daigo, is not a complete bumbass. Similarly Kazuma is not the shy and introverse guy that often takes the main male role. When there is something to say, he just says it. With some exceptions, of course, but nobody is perfect. Ayumu, Kazuma's brother has a minor role. He does not play neither in favor nor against Kazuma, he just does... the brother... Like a very normal broder. Well in fact I would have gladly spared some of the scenes involving him... But oh well... That's it for the male side of the cast.

On the girl's side it's not everything so well and good, but it still satisfies. Of the whole group, the main female characters have their part in the story and take their chances... In other words they have an active role. But, once one as seen all the episodes, there is the feeling that all the others girls hanging around with the group only seem to be there because they where needed for the final scene, because without them the characters would not think what they think, and would not do what they do. But while having some moments of glory in the previous episodes, they aren't that present. Not saying that *all* of the girls should have a crush on the main male character (well, I would have liked to see a specific one of those girls a little more engaged. I keep the name for myself to avoid spoilers :P)... Just be a little more "active" instead of just speeching a couple of sentences in each episode.
And in the end this reduces the already small cast to a just 4-5 characters.

8/10. Small cast. Shame. But absence of strange and idiot characters is appreciated. Sometimes they help, but an anime every now and then without doesn't hurt! Also the absence of complete airhead girls who never realize on the consequence of their actions on the feelings of the other was really appreciated.

Overall - 7/10
Worth seeing, it is however not a must. Do not expect any really moving or dramatic scene, for tears aren't on the menu of this anime.
It's a pleasant story of a group of friends that in the end blossoms in something more, without loading too much the emotions of the viewer. So a low intensity that doesn't hurt and provides a welcome moment of relax between all the other heavy-emotion-loaded anime.

7/10. There is something better out there, but I absolutely do not regret watching it.

This anime was fun to watch. Like all Japanese anime it seemed a little rushed at the end. I don't know if they were losing ratings or what but the story overall was good.  This is a slice of life, school boy, harem comedy/ romance. It was easy to follow and they pretty much introduced the women one at a time and ended at the end of the episode if the girl was a match for the main character. I am not sure the purpose for the little brother. It seemed as if they must have had a bigger story in mind and then ran out of time, money or just changed direction of the story structure. Overall it was a good story, loved the ending.

Story - The story was okay. Not bad but not real good. Another harem but more serious then most meaning it didn't have a bunch of girls chasing after one guy so it felt fresh. It took awhile for each girls to develop feelings for our male protaganist. I was happy with the pace the show went at. I would like a second season even though it has ended. But I would like to see a little more of just the characters hanging out. So it was just an okay story. Worth the watch if you want a more realistic harem. I don't usually root for the girl that was picked in the end but I thought she was the best choice overall.

Animation - It's one of the newest anime out so you would expect it to be animated well. I didn't find anything wrong with the animation so I'll just give it a good score.

Sound - Not to memerable. I honestly don't remember how the opening or endings went or remember anything from the soundtrack. So I can't say much about that. Other then that the voice actors did well. Even though their wasn't any emotion in the anime the actors did their job.

Characters - The only thing that probably would have made me drop this is the characters. They weren't to exciting. The main character was your typical nice guy who won't try to one up anyone or break anyones heart and was a good brother. So nothing new here. His brother was kind of cool... and yeah he was a little cute. I usually don't mind all the stereotypical characters in these cases but five of the girls were just kind of boring. I thought I would like Hina and Madoka but they didn't have much of their own personality. Ibuki grew on me towards the end and became likable but thats it. Other then that they were all kind of boring.The only character I ende up really liking was Ui. She had a cute personality and I watched the show just for her. I liked her even more when she realized she had feelings for Kazuma and acted more nervous because of it. She isn't in my top characters ever, but she definitly stands out in the crowd. I didn't dislike the rest of the cast, I just wasn't to excited to see what they would do next or wondered what they could add the the story. They were just... there...

Surprisingly good, given the standard harem anime setup and the clichés running rampant througout the story. I'm generally pretty tolerant to clichés, when the story works and doesn't bore me, and this is one of those cases. I felt more nostalgic because of all the previously enjoyed romances and slice of lives that this reminded me of, rather than annoyed at the lack of originality.

All the characters fit their archetypes well, but I still found them likeable and it wasn't long until I saw them as individual characters rather than representatives of their archetypes. Sure, the tsundere types (there are two of them) were a bit annoying at first, but that phase was over quickly enough. Some of the girls actually have some depth to them - nothing amazing, but they don't exactly feel like cardboad characters either. The male lead is a decent enough fellow, not exactly bright, but for a harem lead, he's surprisingly decisive. Also, his little brother is a very nice touch that brings the story a dash of originality. Luckily, I also took an instant liking to the girl he ended up choosing, so while I know some people who're not happy about the ending, personally I'm rather pleased with it.

Technically it's pleasing to the eye and ear. No problems with the animation, and the art is pleasant both in the characted designs and the backgrounds. The environment is a nice rural town, so some of the background art is really very nice. The BG musics are standard stuff, but I like the OP, and insert songs are used fairly well. I also like the fact that none of the seiyuu are too familiar to me, they don't make me think, "oh, I've heard this voice in that other anime..."

Throughout the story I got the feeling that the creators of this story actually enjoyed what they were doing. The story is thoroughly light, but unlike, say, Shukufuku no Campanella (for the most part), it didn't feel overly sweet and happy, just... fun. There's quite enough fanservice and moe (some of it the shouta kind -.-'), but apart from the obligatory swimsuit ep, it doesn't feel like the creators were trying to sell the anime with those qualities. With quite decent comedy and dialogue, likeable characters, the harem situation handled without unnecessary drama, and a fairly satisfying ending, I can't say I regret watching this. Quite the contrary, I enjoyed every cliché-filled minute of it. It was a fun watch that always managed put me in a good mood.

Pretty good story. I skipped most of it though to be honest. Like this is the most I've ever skipped in an anime but it's not bad if your looking for romance.