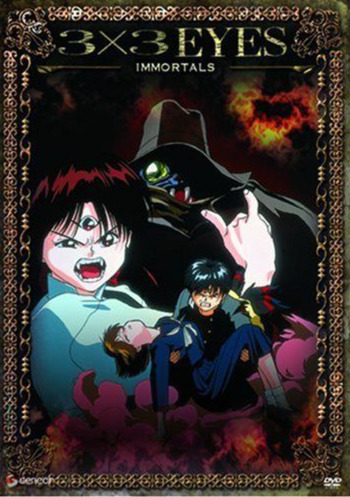 3x3 Eyes is what you call unique & yet not unique, now for the explanation.

When I first watched 3x3 eyes I was surprised on how the story line like so many others of its time had demon's etc. but then shocked me with the fact that it had a main character Yakumo Fujii who was killed from the start and then brought back as an immortal.

Not only was this in the first OVA alone but you would think being an immortal would make you strong "This is where it becomes unique" well your wrong, your still as weak as ever, continuing through the story is how he needs to become strong and protect the person who gave him this power "Pai" {Even though it was her pet that killed him the first time round} and make her wish come true to become human.

The STORY of 3 x 3 Eyes, while having the potential to have been wonderful, turned out to be a flop.  It, in my opinion, was poorly presented and left the viewer feeling a little bit blank and bored.  I thought that this whole him being her Wu and turning her human so that she could forget her past would be pretty interesting - sure, it was a bit cliche, but any anime can get over a cliche as long as it is well presented and thought out and I just didn't get that feeling with this anime.

The ANIMATION, for a 1991 anime, is perfectly average.  It's not wonderful, but it's not terrible either.  I didn't feel anything in particular towards the art work, but it did make me nostalgic for other older, early 1990's animes.

The SOUND was nothing exciting, but Pai's voice got on my last nerve.  I understand that it was suppose to go with her character, but it just sounded so high and made me cringe whenever she spoke as Pai.  However, when she was the Sanjiyan, her voice was excellent. (NOTE: I watched this in English dub).

I severely disliked the CHARACTERS.  Nothing was exception about them, their design was boring and their personalities, for me, remained under-developed.  The only character I truly loved was the Sanjiyan and she didn't make enough appearances.  I did like Yakumo's character development, however, but still felt like he remained a bit of a wuss.

My PERSONAL ENJOYMENT for this series was very low.  I tried so hard to like it because it is one of my sister's favorites and I generally like anime of the 1990's - so I honestly thought I would like this, but to me it was a flop.

OVERALL, I would probably not recommend this anime due to my own distaste, however if you're a lover of early 1990's anime, then maybe this anime might spark your interest.

Solid anime adaptation of a manga. Good amounts of action to break up a rather quick paced romance. Nice call back from 90's anime. Kinda short though. If you want the full story I'd suggest reading the books.