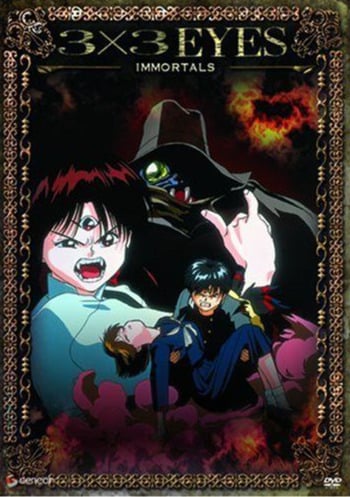 A teenaged outsider with strange new powers is Earth's only hope against a horde of demonic invaders! When high school student Yousuke Suruga accidentally breaks an ancient shinto shrine, his physical body merges with the Bow of Suzaku, an enigmatic weapon from ancient times. Yousuke's only hope lies with Ezo, the eccentric history teacher who wields the Spear of Seiryuu, another mystic weapon that, when combined with the Bow of Suzaku, may be the world's only hope against the ever-growing threat of the monster realm.

On a remote island, a skilled swordsman who honed his craft on the local population attempts to atone for his sins and lift a curse by hunting and killing demons.

Across the world, malevolent beings known as il inhabit enchanting objects to entice curious humans toward them, and in doing so they devour the heart and freely use their victims’ bodies as puppets. To combat the threat that the il pose, hunters called Syste Behards roam the land fighting their prey to keep innocent civilians safe. One such hunter is March, who has an incredible ability capable of subduing, exorcising, and defeating ils. But with a dark power sleeping inside that threatens to overwhelm the young Syste Berhard at the first sign of falling in love, can March continue to fight the il and still remain human?

Bella, a girl with poor magic skills, attends the magic academy Anziffollon. Desperately following the footsteps of a certain person's dream, she eventually gets her hands on a forbidden magic...