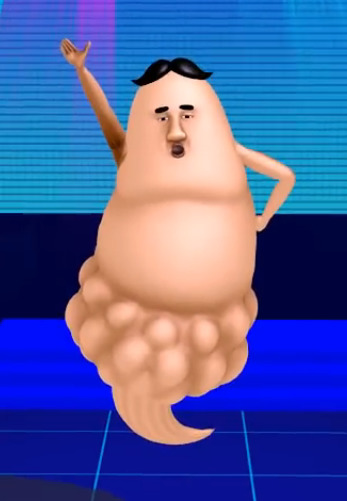 Was a work of art

The best thing EVER to exist. Like I don't need to watch anything else. Now I will only be dissatisfied cause this tops everything that I have seen and ever will see. 100/10 it's perfect and it cures my desire for love and human interactions.

An absolute masterpiece. every aspect of this was enough to make it the best anime ever made

The story is really not for simple-minded people, you truly need an IQ that rivals at least Nikola Tesla's, which is the reason this was even made. See, in just 25 seconds, 3D Onara Gorou ga Dance Dance (3OGgDD from now on) makes sure to make the person watching it really think. Think about everything, but especially life. You begin to ask questions to yourself such as "What lead to me watch a 25 second video of a fart dancing?" or "Fart got the moves tho". And in the end, you end up satisfied with the amazing complexity a dancing fart can have

3OGgDD has an animation style that can rival all time greats such as Ex-Arm and Berserk 2016, as well as having amazing dancing. Simply the best dancing I have ever seen in an anime ever, and overall, the best animation ever possible in mankind. Disney has nothing on ILCA because, really. Disney could never pull something as well-animated, well-made as 3D Onara Gorou Dance Dance

As someone that absolutely loves music and anime, as well as anime music, I have faith in myself when I say that 3OGgDD has the absolutely BEST soundtrack EVER made in the history of humanity. With just absolute classic songs and really just a soundtrack that has potential to revolutionize the entire industry if anyone just paid attention and listened to it

The characters are just plain amazing in this absolute masterpiece. All of them make their intentions clear when they appear, and you really end up warming up to them in the end. All characters in 3OGgDD have absolutely flawless character arcs, from Onara Gorou himself, to Pink Light-Kun, Cyan Light-Chan and my absolute favourite character of the bunch, Stage Light-Kun. In the beginning, Stage Light-Kun isn't really present at all, due to the fact that Onara Gorou hasn't yet began. But as it hits 0:03 and Onara Gorou turns, Stage Light-Kun turns on and reveals the absolute greatness that is his character in this absolute rollercoaster of emotions. It often changes colours but always, and I mean always stays on for Onara Gorou, Pink Light-Kun and Cyan Light-Kun, as if to say that he will always be there for his friends and companions

I must say that was quite interesting. It came up as reccomended if you watched AOT so I said why not and I am not dissapointed.

Animation: It was animated

Sound: It was actually really pleasent, I am not even going to jest on that

Characters: Idk what that thing was but I'll give a 5 for effort and that it was in CG

Overall: It is watchable...