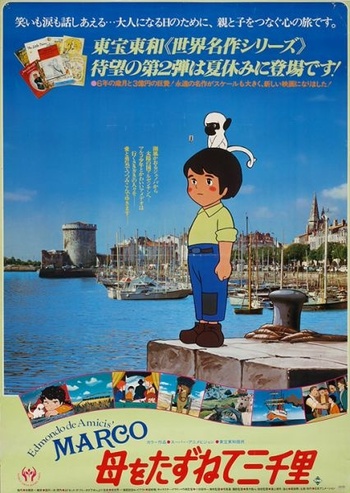 If you're looking for anime similar to 3000 Leagues in Search of Mother Movie, you might like these titles.

Perrine is a young girl who lives in Bosnia with her Indian mother and beloved father – that is, until her father passes away, leaving her mother with a single wish: travel to France to be with his father. The over 1,000 kilometer journey seems unfathomable, but Perrine and her mother have a plan: they will photograph people in the towns along the way to support themselves. With their hardy donkey Palikare and faithful dog Baron, the two set forth for Paris; along the way they encounter kind souls, barren villages, and a number of hardships; will Perrine and her mother survive the long journey to France?

Ten years have passed since the March sisters lived together in Newcord, and Jo March is now married to Professor Friedrich Bhaer. Together they have founded a school on Plumfield farm where orphaned children can live and learn together. Their peaceful lives take an interesting turn one day when Jo receives a new girl, Nan Harding, who is rumored to be so strong-willed that she drove her previous tutor away within half an hour! Never to give up on any child, Jo encourages Nan's confidence and creativity; along with the other children who each have their personal stories, Nan finds fulfillment as she experiences love, sorrow, friendship and adventure on Plumfield farm.