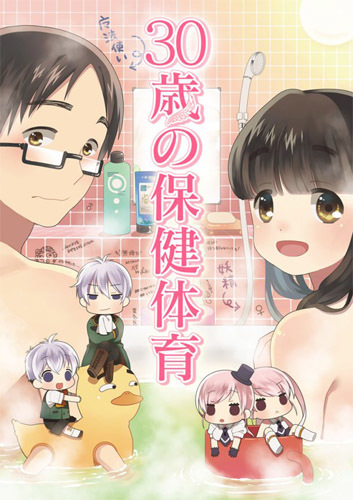 The STORY of 30-sai no Hoken Taiiku is exactly what it says it is - sex education for thiry year old (virgins).  This was a comically produced anime to deal with the growing social anxiety in Japan for older men and women.  Each episode contains lessons for learning how to date and how to have sex presented by "sex gods" who come to help those thirty year old virgins.

The ANIMATION, for me, was not grand, but then again this isn't an anime that's suppose to focus on the actual animation, but the literal message (the lessons).  I thought the dark outline of each character was kind of weird and it was too cartoon-y for my tastes.

The SOUND was fine - the OP was cute and there was nothing wrong with the voice acting.   There's nothing much to say here - it wasn't wonderful, it wasn't terrible.  A solid C rating.

There is no CHARACTER development in this besides the fact of the two main characters becoming more confident in their bodies and in themselves to eventually have sex and form a relationship with each other.  That was the point of the series as well, so it accomplished what it set out to do.

My PERSONAL ENJOYMENT for this series was probably a 6 - which is basically what I'd give it overall.  It was only 12 minutes long and had they been longer episodes, it might have driven me a little nuts.  I couldn't find it uncensored anywhere so the constant censoring seriously got on my nerves.  I got a few laughs out of the ridiculous sex gods' antics.

OVERALL, I probably wouldn't recommend this anime to anyone unless they're looking for a silly way to learn how to have sex.  (And then you'd have to find it uncensored, then).  Really, if you're going to watch this anime you need to take it for what it is - a sex education anime.  This show set out what it meant to do.

This anime was really funny to watch. The characters are both shy and awkward and I really adore them. It’s relatable on the idea of losing your virginity.

This is a short and fun little series; the characters completely sell it and I kept watching just to spend more time with them. They are all really funny - more in video review: http://www.youtube.com/watch?v=sqAzr31gNcI

Story- Easy to understand, straight-forward, sticks to the progression of the main plot. And one of my favorite things in an anime, it has a ending that provides closure! Don't get me wrong, it has a good deal of slap-stick hijinks. But they also play into the story progression. I found the whole show from beginning to end highly entertaining!

Animation- The art is good, not great. There are many segments where the art is exceedingly simplistic and cutesy. I did rather enjoy the cencorship decoys.

Sound- The music used didn't really catch my attention but the voice actors were great. The sound effects were silly and not over-used.

Overall- This was a fun anime that I was able to get through in one evening. I would watch it again. Don't understand why this show isn't more popular. Worth the watch.