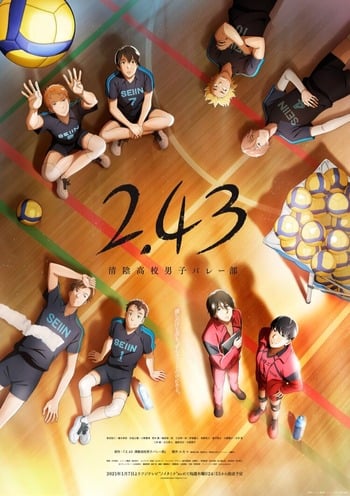 If you play volleyball then, like me, you're probably going to have a hard time finding this show believable. It's pretty clear that the creators were just trying to ride the volleyball hype train rather than present this sport seriously. Ball physics are wack, it barely even looks like they exist. They have no effect on their surroundings. They have no idea how a ball bounces, or sounds it seems. Some of the sound effects they use don't usually sound like ones heard while playing volleyball. They sound like they belong more in an action RPG than a volleyball match.

There aren't many strategies addressed or explained in this show. The only one I can think of is the blockers marking one person because no one else can spike the ball. The huge effort it takes for teams to come together and play ball well isn't really addressed, it's just hey-let's-spike-a-ball-around-with-no-blockers-because-that-really-helps-every-single-person's-gameplay. In other words, the research required to make a show believable is incredibly lacking in this, and I love volleyball too much to overlook it. The timing is also wack, and it makes it difficult to connect to the characters or care about the matches they play.

In the show they say that one person shouldn't play the game by themselves, but then proceed to make matches all about one or two people, which I don't understand?? There are six people on the court, use them and give them recognition please. Making the story about only two people playing the game is hypocritical.

Wishing for more attention to be shed on the other players on the Seiin team. There are more than several of which I don't even know their names.

I only enjoyed two things consistantly: the opening and Kuroba's cousin, who only doesn't appear very often. She has spunk and reminds people to take their dreams seriously, and I like her character.

The problem with 2.43 is that it’s a sports anime that’s trying hard to not look like a sports anime. There’s some volleyball that happens here and there’s some strategy talk when the show’s in the mood to dive into it, but because it’s almost embarrassed to be what it really is, 2.43 overcompensates by leaning so far into its drama and character angst, that you start wondering why anyone would keep playing the game if it brings them this much suffering.

The premise was supposed to be the hook that set it apart from everyone else: selfish star player learns to become human thanks to volleyball. Instead, what we get is this: selfish star player learns to love volleyball thanks to side characters who let him walk all over them. The only resolution they can think of to address the angst is to simply let the angst be, which is why characters sometimes break out into bursts of high emotion without any warning.

It’s also why the show starts to resemble a soap opera more than a sports anime at several points, only to switch gears suddenly when it remembers it’s supposed to be a sports anime. In its attempt to try and do more with its material, 2.43 gets lost in its drama and ends up looking terribly half-assed.

Problems are met with bigger problems that show up to beat the first problems into submission. Signing up to play a game together almost feels like a marriage contract with an extreme focus on the “’till death do us part” part. Volleyball is a hard sell in other words, and from there, it’s just an ugly stockpiling of emotions and drama tropes that are supposed to give some depth, but morph this into an exhausting slog instead.

There’s a sob story for every named character in this show – injury problems, height limitations, shitty personalities, overall dumbness – but even if it all gets to be too much, we’re still somehow expected to just nod along when we’re presented with the half-baked camaraderie and plot road bumps. The story moves in reasonable ways sometimes, but because 2.43 takes shortcuts to these end points, it’s panting and all out of breath by the time it gets to them.

Watching this feels a lot like watching someone try to put a puzzle together by jamming some pieces together and forcing them all to fit. There’s a picture it’s trying to make for you and it’s something we catch a glimpse of early on, but the process of seeing it all come together is so forceful, that your head just might start to ring from all the bashing 2.43 inflicts on you. It’s a “my way or the highway” type of show with hardly anyone to cheer for – which, if you think about it, is already quite the incredible feat on its own considering this is still supposed to be a sports anime.

Firstly, I don't think there's anything wrong with comparing sports anime to others of its kind; people have done that since the beginning of time with every genre of anime. However, it does become an issue when you clearly have a bias towards one, and aren't really giving the other a chance. If you like sports anime, I'd recommend giving this a try and enjoying it for what it is.

With that being said, so far this anime is okay (lol). It's hard to comment on the story line with only 7 episodes out right now, because shows can improve A LOT from the first few episodes, but at times it's a little clunky and the timeline is confusing. So far there's more drama than volleyball, which it's good to have a mix, but I'd like some more volleyball for right now.

The relationship between the two main characters is kind of awkward so far. I feel like them being childhood friends shouldn't even have been included since it plays no part outside of the first 5 minute of the first episode. I haven't really developed any sort of connection or interest to the other characters yet (except maybe Aoki). Hopefully we'll see all the characters become friends with each of them getting their own time in the spotlight in the future.

I really love the intro and outro songs, they're both fun and catchy.

As far as the animation, I would like some more ~flare~. It doesn't really stand out right now. I'd like to see wider angle shots of full plays. Currently, we've been getting a lot of single close-ups of spikes and serves and blah blah. It's definitely harder to animate those extended scenes, but that's what I look for in a sports anime.

In conclusion, this anime has potential, so I'll continue watching it. Review subject to change in the future.

I was very excited about this. Unfortunately, it didn't live up to my expectations.
The animation itself was good. The opening and the ending song are definitely on the list of my favorite.
It was the story part of the anime that I didn't like. In the beginning, we were introduced to this great young setter who isn't much of a team player. And because of his introverted nature and miscommunications, things happen. He moves to a new school and joins a new team.
It set up to be a story about him believing more in his team and being a team player. But the anime gave us nothing that would show how they became a team. We got a few practice sessions and an official match and bam they are all in sync.

The story doesn't focus on volleyball or the team or the individual characters. It goes all over the place.
We are supposed to root for those characters but we are provided with nothing that would make us root for them. Most of the people in the comment didn't even know who was who at the end of the season.

The sound effects were kinda bad too. Most of the sound of hitting the ball sound like a hammer hitting on the wood.
The only thing that I enjoyed was the opening and the ending songs.

I first and foremost i think it needs to be addressed that this anime is not Haikyuu and should not be compared to it, as i feel as though that is what is moulding peoples opinion on this anime. It is a drama anime and Haikyuu is not so there is obvioiusly going to be drama within the plot, now onto the anime.

I personally loved this anime, i felt as though it had a compelling story line and pretty animation. I have to admit at first i was not so into this anime but when watching the anime i started to get into it more due to the development of the characters as well as the intoduction to the other team.

Through watching this anime I felt a connection to the two main characters Haijima ans Kuroba i felt the development on Haijima's character was executed very well as it was apparent that he was often misunderstood due to his personality,i have seen some arguments that they see his character to be a cliche; but the way it was excuted with his backstory i felt was interesting and gave me a greater inisght into his character.

With all that said, at times I did get irritated witht the dialouge or the lack of scenes of them actually playing volleyball and having a random mention of the score without seeing them actually playing anything but it wasn't that bad. I feel as though the plot was good; and from what i have heard from others it did take awhile to warm up to the anime and when they did give it a chance they really enjoyed it.

I hope this anime does get a season 2.