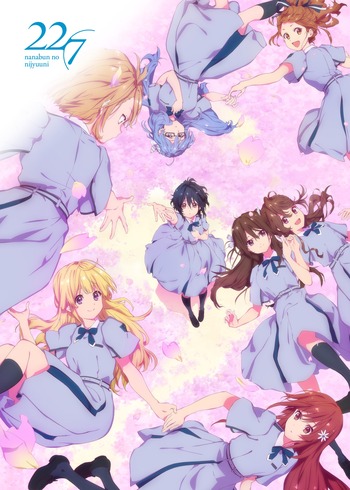 No spoilers- The premise of this anime really drew me in; it follows an idol group formed without the girls auditioning, with some not even interested in being idols at all! The group was formed and all of their decisions made by a wall that printed them out onto metal cards. Yet despite the interesting premise, the show fell flat for me. Unlike other idol animes I have seen, these girls did not have to climb for their success. With the stages and performances the machine demanded, their success was ensured with a strong performance. With the idols themselves, each girl was clearly defined and different from one another. However, I would have liked to see further development on the part of ALL members, rather than each girl's growth being relegated to just one episode.

Overall, the show is enjoyable; if the plot was better structured, I would have enjoyed it more!

Honestly, one of the most unique and beautiful idol genre anime. every character has their own unique backstory. although its kinda weird with this "wall" thingy, i mean i get it the wall was important. because without it these girls would never meet and wouldnt become an idol and such. but i feel like there could be any other way to unite the girls together. But again its a beautiful anime. More people should see this anime. and i feel like some people would get bored on the first/two episodes...but i recommend you to just wait and dont drop it if its boring for you on the first/two episodes.

This anime is pretty ok, but if you come into this anime thinking that the mystery of the wall sounds interesting. You will be disappointed. But if you come into this because you like idol anime and the fun fuzzy feeling you get from watching the characters interact, 22/7 won't disappoint. It still isn't the best or nearperfect like the classics of the genre but it will for sure satisfy you!