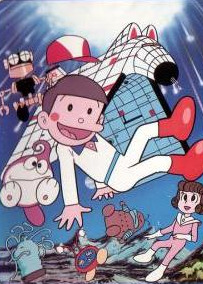 The space travelling company, YAT, is thrown into the unknown realms of the outer space. At the same time, the group encounters the psychic, Maron, and scientist, Note. Subsequently, the two of them are attacked by the evil monarch, Ganon. Note was captured and taken away after suffering an attack from one of Ganon's followers, Baras. In order to rescue Note, the group had to use the instantenoeous portable machine which Note invented so as to travel to Ganon's planet. However, no one knows where the planet is...

In the future, a dimensional tunnel in space allows people to travel almost anywhere in the universe aboard spaceships. Many travel companies take advantage of the situation and offer tours to faraway planets, such as the Yamamoto Anshin Travel company (YAT for short).  Staffed by its captain Yamamoto, his daughter Katsura, mascot Bukki, robot Kanabi and others, YAT is soon joined by Goro, a boy who’s been searching for his missing father for some time.

Professor Senbei finds a videotape of his deceased father providing instructions on how to create a love potion. The main ingredient is a tear of the evil Gyaasuka Daimao who lives at the Wonder Island. To retrieve it, Senbei takes Arale and Gatchan on a wacky adventure.