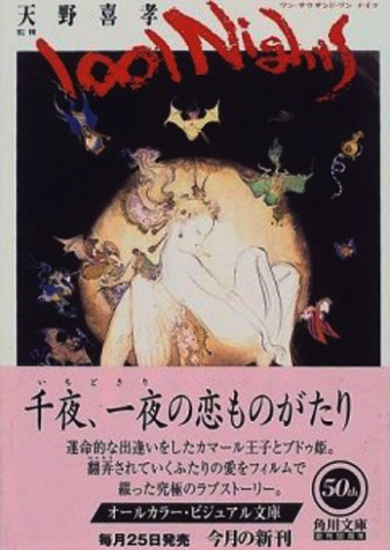 I dropped this, probably because it wasn't what I was expecting. It had no dialogue, and it might not have needed it if the story could be easily shown. But it wasn't, it was just trippy, for lack of a better word.

The animation was beautiful and had nice flow, the sound was okay. But story and characters were bascially non-existant. If you love symbolism, this movie will be more for you.

a very atmospheric and symbolic work creative types will enjoy and perhaps even relate to.. think leon bakst or the bell jar...1001 nights may be enjoyed with or without the use of controlled substances..

Story: I don't think there is a definitive story or plot to this or if you can figure it out, you must have been high while watching it. It's pretty much inside the dream of the main female character, Budu, who apparently dreams about being naked a lot and possibly being raped by the devil, but is in love with Kamar (who quite possibly could be the devil/demon), the male lead who she eventually has sex with too. There's also fairies being chased by demons randomly in this dream. Maybe it's all a metaphore for Budu fighting her inner demons, her being the innocent fairy being chased around.

Animation: There are parts where the animation looks quite well done with water color-ish animation style with some cg things thrown in here and there and also what looks like paperdolls being used. But, other places where it just looks like sketches with pencil.

Sound: The whole movie is just an instrumental piece that plays along with the scenes. Intense scenes with the devil had intense music with lots of dramatic horns playing and drums. The only spoken words are at the beginning and it was only a few.

Characters: It's honestly very hard to follow the characters since there's no real development, but apparently Budu has some issues going on.

Overall: This 23 minute "movie" is pretty hard to follow. Being so short, I'm sure you could watch it a few times and figure it out, but honestly, I don't think it'd be that worth it.