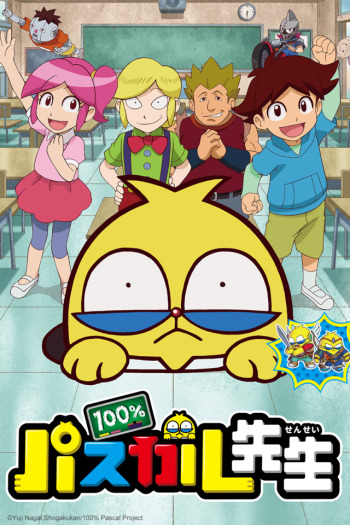 While 100% Pascal-sensei isn't a good show, I have to admit it's a decent show for kids, which is what it was designed for. The animartion is bright, the stories are outrageous, and the characters are ridiculous. Great qualities for a kid's show. However, for regular anime fans there isn't too much to enjoy.

The story follows the outrageous yellow mascot-looking teacher Pascal, and his class. They go on adventures together both inside and outside the classroom, usually caused by Pascal's over-the-top abilities and ignorance. I would almost say it's Assasination Classroom for kids; a crazy yellow teacher who does stuff his own way. There is also a side-story called Pascal's World at the end of each episode which is a fantasy short story within the episode where all the characters are played by Pascal.

While the show is still ongoing (I am on episode 9), each episode so far is unique. Many kids' shows tend to quickly become repetative, but this show so far is being original each episode without over-using any plot point or joke. Of course, many of the situations are too silly to be entertaining (pop-quizz harrassment, unlikely health check-ups scenarios, etc.) to adults, so anyone older than twelve probably won't find much enjoyment in them.

Most of the characters are fairly generic. Main boy, token girl, a rich kid, and a bully make up the main cast. But there are also a few original characters thrown in such as the frequently-naked principal, the female helmet-wearing-delinquent, and of course the title character Pascal. Pascal in particular is the star of the show, as it's mostly his crazy antics that drive the episodes, and all the kids do is react to him. He might be a bit immature of some adults to stand, but great for kids.

I wouldn't recommend this show to anyone, and I don't really like it myself, however I do think it's a good show for Japanese kids to watch (especially boys). My rating is a mix of my personally enjoyment (/overall quality), which was very low, and praise for being decent at what it was designed to be. While there are much better kid shows out there, this is alright.

Well, this reminds me of yoki-watch but not really into this. But, good for kids tho