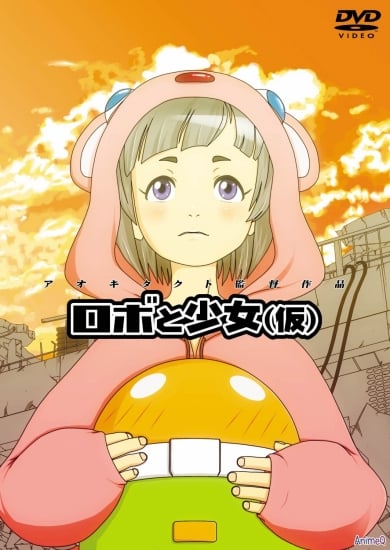 If you're looking for anime similar to 100 Byou Cinema: Robo to Shoujo (Kari), you might like these titles.

One rain-soaked evening, a young girl wanders through the streets and runs across a very curious and unique new friend...

If you liked 100 Byou Cinema, and you especially liked the robots, then maybe Rain City is worth a go for you. Both of these shows are short and can be easily slotted into your day, both of them look at a future where robots are a common appearance. Rain City takes a more melancholic look into the idea, whereas 100 Byou[...] looks at it through more comedic eyes.

Both of them also utilise unconventional art styles.

Need a short in your life? Like random comedy and a sci-fi setting? Well you should probably watch Space Patrol Luluco, it utilises its world to brilliant comedic effect, and makes countless references to other Trigger and Gainax shows, but if you're looking for more, then maybe 100 Byou[...] is worth a try too. It also uses random comedy and manages it pretty well, and I feel the two share enough similarities that if you enjoy one, you should get some enjoyment from the other.

In a futuristic Earth where robots live side by side with humans, performing tasks and roaming the streets at their whim, a young boy walks through a city by himself. While passing by an alley he spots a quirky red robot who, upon destroying and eating another robot, grows a mechanical piece onto its makeshift tail. Intrigued, the boy observes the robot as it methodically eats and grows, and whether he likes it or not, this stray robot soon appears to not want to leave the boy’s side...

Both of these robo-centric anime are set in a decrepit city, where a robot is just trying to figure out where he belongs. The robots pal around with a young child, seek out other robots, and even have the equivalent of a boss battle. the animation techniques are somewhat different, but the color palet is nearly identical. So, if you liked one, try the other.

The year is 48650 and in Merkur, humankind is at war with the machine race. High in their regal mansion, the quirky robots Lady Drossel Von Flugel and her servant Gedachtnis spend their time discussing the intricacies of life. From the art of letter writing and human verbal communication to the trials of owning a pet, the two show themselves to be utterly clueless. Then again, who cares when you have a robotic monkey to play with?

She's a robo-princess, he's an under-appreciated rainbow-maker. What could they possibly have in common?

Both the robo protagonists are trying to find they place in the grand scheme of things. Both have had issues with humans, although 100's case is a little more immediate. Both have companions that try to protect them while also giving them room to learn.

While Fireball is more about willed puns, and 100 is more about physical comedy, both are comedies about robots. So, if you liked one, try the other.

When a boy's uncle sends him confusing plans for a robot from America, the boy makes a mistake in the assembly which leads to unexpected results.

The year is now 48234, and in Merkur, the quirky robots Drossel von Flügel and Gedächtnis continue to ponder the little things in life. What will the two discover together, and more importantly, can Drossel improve her posture?