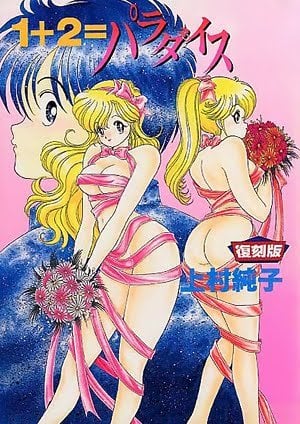 There is something endearing about old-school ecchi anime. Most of the time it’s so bad, you just have to see it to believe that something so bad could have been produced, and 1+2 = Paradise is certainly no exception. In fact, the show even has moments in which I rewound certain scenes to catch the utterly depraved hilarity once more.

The sloppily thrown together plot revolves around a young boy, Yuusuke, who suffered a traumatic ordeal as a child at the hands of two mischievous twins. Let’s just say playing “Doctors and Nurses” should never involve a pair of scissors. Now, post puberty, he finds himself face to face with the same girls once more as his gynaecologist father attempts to cure his floozy-phobic son, who he sees as an embarrassment to his profession. Competing for the opportunity to stay with the guy and his father, sisters Rika and Yuka use every method at their disposal to seduce their terrified victim. Employing dirty tactics such as the naked apron technique, the two feel the need to help out with some energetic polishing and vigorous rubbing as they clean the house. Any bizarre cliché you can think of will not compare to the outlandish behaviour unfolding onscreen; from one sister warming Yuusuke’s underpants in her squish mitten, to the other's accidental slip that sees her bound tightly against the protagonist wearing nothing but her delicates, open mouthed disbelief is soon filled to the brim with laughter.

Sadly, the second episode in this short OVA lacks the downright perversion of the first. Introducing a third horny female just kills the comedy love triangle that made the initial thirty minutes so terribly hilarious. Watching four people chase around onscreen, the show descends into a Benny Hill sketch, lacking only a trombone accompaniment. A few more over the top situations find their way into the latter show, such as Yuusuke somehow finding himself wearing a pair of Yuka’s panties whilst she is still inside them, however they just lack the finesse and depravity. It’s sad but true that removing the ecchi from 1+2 = Paradise leaves nothing but a tedious husk that is almost painful to sit through.

Cheap, horrendous and not helped by a VHS rip, the visual quality of 1+2 = Paradise is god-awful. The poor character designs in the first of the two OVAs almost seem like a Da Vinci masterpiece when compared with the bargain bucket, budget slashed cast in the second episode. The once ginger twins become squished faced blonde bimbos, and their rival Barako could probably cut through a tin can with her angular chin. Emotions are comically hammed up, and blank faces of disbelief are quite literally that: warped wax heads where any features have completely melted away. Verging on being awarded a medal for “most boobies shown in sixty minutes”, the comical use of sweater potatoes is pretty dreadful, but something to impress your friends with over a beer-fuelled conversation.

The voice acting, although far from excellent, is actually passable. Yuusuke sounds constantly tortured, and when not moaning sensually, the harlot twins sound reasonably cute. The soundtrack doesn’t fair quite as well, with the closing tune being instantly forgettable, and just five minutes after watching the show, I can’t even remember if there was any incidental music at all...

I’m often curious about the mindset of a writer who seems to think that a woman’s place in the home is to do nothing but pleasure her man. Portraying every girl as a sex crazed maniac, character development is forsaken in the name of showing more booby flesh, or exploiting another panty shot. Yuusuke, although a complete wet flannel, is actually relatively endearing. I usually tire quickly of sappy male protagonists, but his reactions to having a female crotch ground against his mouth never ceases to be funny.

It’s sad but true, my bitchy reviews are car crash entertainment. As soon as my fearsome wrath is unleashed and a bad score is given, readers feel the need to go watch the show and find out for themselves exactly how terrible the victim of my rating actually is. Although not made of the same terrible awesomeness of Lingerie Senshi Papillion Rose, 1+2 = Paradise is definitely in the realms of shows so bad, they’re good.

The premis of this anime is that Yuuske is stuck at home with two attractive twins, and he has to pick one to stay. Both of them want to stay  at his home really bad. Enough to seduce him. Basically it's a teenage boy's wet dream.Not a very promising story to convey in an ova.

Only shows female charactes for attractive qualities.They have no brains, talent, or skills, and even if they it's not important enough for it to be included. "The thought of marrying you is the only thing that kept us going!" At times I wonder if this is for real or just meant to be a sad sad joke.

Some may claim judging animation is unfair, because it was a  1990's anime and also an ova, so most likely low budget. With both of these things in mind I can say it was fair decent, but I haven't seen enough early 90's to compare it to so I feel of place judging it.

Has a charming weirdness to it. If it wasn't for all the breast and crotch shots some parts of it would be clever and more funny.

Overall for me, it missed the mark.

I decided to watch this anime because a friend reccommended it to me. At first I was rather skeptical and wondered if my friend was just messing with me. I can now say with absolute certainty...

So let me be the first to say, "What... the hell... did I just spend an hour watching?" While it's not 100% bad, as it does have that nostalgic 90s animation style, it is 95% ridiculous, and the only way anyone could say this show is great is if either A) they like the animation style, to the point that they base they're opinion entirely around the animation (which isn't actually that great, just pleasantly nostalgic) B) they like ridiculous, nonsensical events being tied together and being called "plot", or the most likely option, C) they like tiddies. If you want to watch it, and even happen to enjoy it, I'm not gonna judge, but it's nowhere near being within the confines of what I personally would call quality anime. If your in it just for the uncensored tiddies, check out Highschool DxD on VRV or something. At least it's got clean animation, cool fight scenes, and a plot you can actually follow. But seriously, with only two episodes, it never recieved a satisfying ending, which is actually the least of my gripes considering I never got the chance to feel invested, and the second episode is basically just equal parts tiddies and a Mary Poppins-esque whimsicality, minus the charm or class of Mary Poppins.