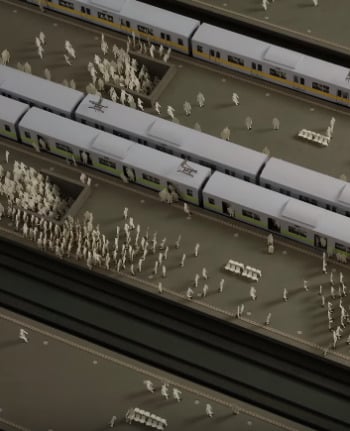 This is the strange story of a catgirl and her excursions along the railways of Japan.

A childhood dream has led Ha Min to work as a conductor for Pidgeon-ho, a slow-train in a backwater country. But the life of the slow-train is unexpectedly ending and Ha Min must transfer to another train in the city. People in the new railroad are different and he soon realizes that there are some things in the slow-train to be missed. On a closer look though, Ha Min discovers that not all is bad, and maybe his dream is nearer than he thinks...

Most people would be concerned about getting a ticket to go around the country by rail, alone, for their wedding anniversary, with their significant other calling it a special break from them - but not Daisuke Nakahara. For this thirty-five year old train and ekiben (train station box lunch) enthusiast, a trip around Japan - spotlighting each region's seasonal delicacies - is the present of his dreams. with each stop - and tasty titbit - telling a story about the region's food and its history. The first stop in his trip? Kyushu, by special express sleeper train! And from there, the track less travelled.

"Let's have fun together in the Railway Club!" Tenman Sora has fallen in an unrequited love for the Railway Club's Mahiro-sensei! "No matter how thorny the trains may be, if it's for Sensei, just bring it on..." The pinnacle of heart-throbbing excitement. We sincerely invite you on a tingly girls-exclusive railway journey!

Asahi Saruta is a clumsy eighteen year-old with a dream – he plans to become a brilliant train operator. After a successful application, the youthful and cute teen gets assigned to Minami Kitazawa station but while he’s excited at taking the first step in his new career, Asahi soon finds that his new workplace is nothing like he thought it would be. Staffed by a gaggle of gorgeous guys, the employees at Minakita are more like pop stars than station workers and are frequently mobbed by hoards of their fans. Now the hapless Asahi must work alongside an ex-delinquent turned Tokyo U graduate, a crossdressing girl with a fetish for uniforms, a heartthrob actor and a bisexual flirt while attempting to pick up the day-to-day duties. But can he really learn how to “please” the customers and attain his dream job in a station where all ex-employees have gone on to become hosts or entertainers?